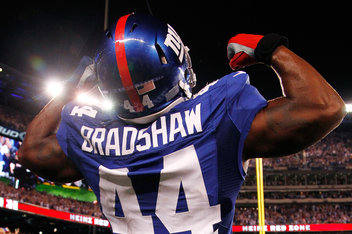 Ahmad Bradshaw has officially signed a 1-year, $2 million offer from the Indianapolis Colts. Bradshaw was a 7th round pick of the New York Giants in 2007, but meant much more to organization than a ‘normal’ 7th rounder. When healthy, Bradshaw demonstrated that he is a top-10 running back in the NFL.

My top 3 favorite Ahmad Bradshaw moments with the New York Giants are;

3) In Week 16, 2011, the Giants and Jets were playing for their post-season lives. Most people remember the 99-yard pitch and catch from Manning to Cruz, however, Bradshaw was really the star of the show. With 20 seconds left in the 3rd quarter, and the Giants leading 10-7, Bradshaw took the handoff from Manning, and well let’s just say Jets safety Brodney Pool wishes he had not. Bradshaw lowered his shoulder, ramming over Poole (on a play that might be considered a penalty with the new 2013 rule book), and danced his way in for a touchdown, putting the Giants up 17-7. Although it was not one of Bradshaw’s overall best performances, that hit on Poole along with 54 rushing yards and 2 touchdowns will be etched in stone for decades to come.

2) As a rookie in 2007, Bradshaw played an instrumental role in the Giants championship campaign. With 3 games remaining in the 2007 season, all the Giants had to do was win 1 of their last 3 to secure a playoff spot. Problem was, the Giants played the then undefeated Patriots in Week 17, so they had to secure a victory in Weeks 15 or 16 to better their chances. The Giants squandered their first opportunity, losing to the Redskins in week 15, leaving their season in the balance. In week 16, on December 23, 2007 the Buffalo Bills stood in the Giants way of reaching the post-season. The Giants were trailing late in that game, making all Giant fans on the edge of their seats.  Bradshaw then broke the game open, when he scored his first NFL touchdown on an 88-yard run. He finished that game with a career-high 151 rushing yards on 17 carries.

1) Who could forget the most debated touchdown in Super Bowl history? With the Giants trailing the Patriots 15-17 late in the 4th quarter, Bradshaw capped off an 88-yard drive. Bradshaw’s 6-yard game-winning touchdown with 57 seconds left in the game was one of the most memorable touchdowns in Giants history all for the wrong reasons. Reports came after the game that Bradshaw was supposed to stop short of the goal line in order to prevent Tom Brady from having time to orchestrate a game winning drive. In short, he fell bottom first into the end zone, and the rest was history.