Tebow and the Pats 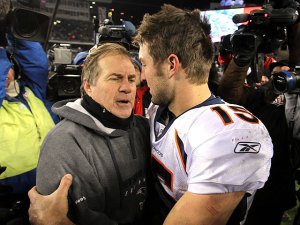 After the dust settled on the news that the New England Patriots have signed Tim Tebow to a non-guaranteed contract, it is time to analyze the move. Coach Bill Belichick was quoted as saying “Anything we do is in the best interest of the team, Tim’s a talented player that works hard, so we’ll see how it goes.”

This is not the first time Coach Belichick has taken an-ex Jet and signed them the following off-season. Danny Woodhead was one of them, and proved to be very valuable to the Patriots during his tenure there. Belichick has a proven track record of not being scared to sign players that other teams would not, such as Albert Hayensworth and Chad Johnson.

Time will only tell how the Tebow move will work out, but in all truthfulness, Tebow could not have picked a better team. He will be able to learn  under one the best coaches in NFL history, Bill Belichick, and getting to sit behind and study Tom Brady as well as Ryan Mallet. If Tebow wants to be a coach after his playing days are over, what better organization to learn from as opposed to the ‘circus’ of the New York Jets.

As a hard worker, and proven winner, one cannot feel some gratification for Tebow and his resilience to continue his NFL career. Lets just hope for his sake his time with the Patriots will work out slightly different than his time with the Jets.