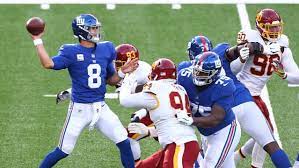 Washington DC: The Giants were trying to avoid starting the season 0-2 for the fifth straight season. The NY Giants had several chances to put the Washington Football Team away on Thursday night but somehow found a way to lose the game. Late in the game with time expiring on the clock, the Washington Football Team missed their game-winning field goal attempt but Giants defensive end Dexter Lawrence was called offsides on the play allowing for a re-kick.

After the game Giants head coach committed on the play. ” Look, we’re not going to turn around and put this game on any one player and one play. There’s enough things we can clean up as a team and we can play better going forward. We’re not going to go ahead and isolate one incident and say that’s the difference in the game right there. We got to make sure that we do a lot of things better for 60 minutes.”

Daniel jones played well for most during the game. Although some of the throws were a little offline. “I think it’s certainly disappointing and like you said, it hurts. We’ve got to get past that and get to work and put our heads back down and focus on what we need to do to improve as a team and make sure that we’re in a better position to win games. It is going to hurt and that is part of it, but eventually we’ll need to move on and get going moving forward as a team.”