Jason Pierre-Paul to have back surgery 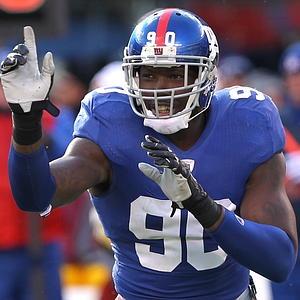 Jason Pierre-Paul, arguably the New York Giants best and most important defensive player will undergo back surgery today. This news comes as a shock as much as a blow to the Giants who are looking to rebound from a disappointing 2012 campaign.

It was reported that JPP played with a  ‘minor’ back injury in 2012, and received multiple epidural injections to get through the season. The surgery is being performed by Dr. Robert Watkins, and as they say, no back surgery is a minor surgery. Early reports indicate that JPP should be ready for the Giants season opener, but of course when dealing with a back, one never knows.

Either way, this comes as devastating news to the Giants, especially after losing Osi Umenyiora to the Atlanta Falcons in free agency. Dwight Freeney just signed with the San Diego Chargers, so he is obviously no longer an option to relieve JPP until he is healthy. The depth chart for the Giants at the DE position looks like this (taken from ESPN.com);

If you are asking yourself who these players are, well that would be a good question. After 2 Super Bowl Championships, it is not fair to question GM Jerry Reese and his analysis on players. Hopefully, someone will step up and fill the void until JPP is healthy enough to go. Also look for hybrid Line Backer Mathias Kiwanuka to spend more time at the DE position. Kiwanuka has played DE for the Giants in previous season, but Tom Coughlin likes to utilize his athletic ability and spread him all over the field.