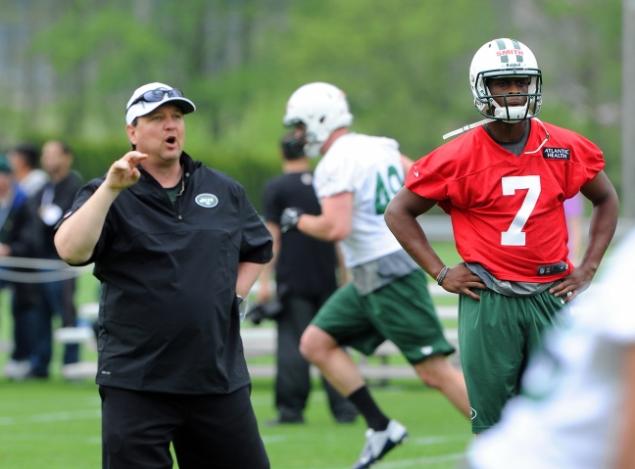 There is no denying that this year Jets quarterback situation is must see television. Geno Smith and Mark Sanchez are going into OTA’s and training camp with an ‘open competition’ to see who wins the starting gig. Many people believe that Sanchez’s massive contract is the sole reason why he is still with the Jets . He’s due $8.25 million in guaranteed salary in 2013, and if the Jets were to cut him before June 1st, the salary-cap hit would be $12.35 million this year and $4.8 million next year.

Mark Sanchez has 52 total turnovers over the last 2 seasons, worst in the entire NFL. Looking to show that the Jets are still his team, Sanchez did what he does best; throw 3 interceptions over the course of Wednesdays practice finished going 6 for 11 in 15 snaps. Smith did not do much better, but that is expected as a rookie still learning a new offense. He finished 3 for 10 with one interception in 14 snaps.

No doubt the quarterback position will be something to monitor all season long. If Sanchez wants to maintain his starting role, he will have to be much better than he was today.