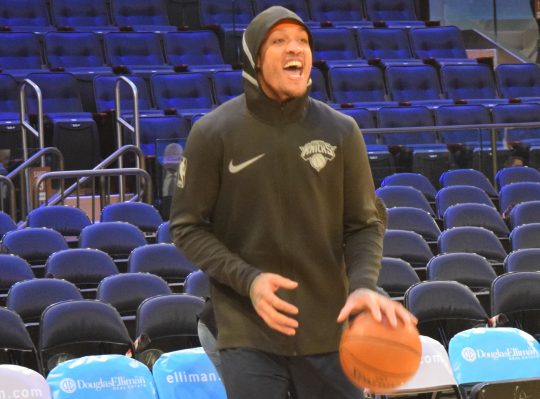 NEW YORK CITY, N.Y. – Tuesday night, the New York Knicks came into thier match-up against the Brooklyn Nets sporting a 22-28 record. The Knicks had lost four of thier last six games, but hoped to build on a 107-85 win over the Phoenix Suns last Friday. Brooklyn had been struggling as well, losing six of their last eight games. The Nets would have a tall task ahead of them, considering how poorly they had played on the road (8-17 record), and how well the Knicks play in the Garden (15-9 record).

Kristaps Porzingis (28 pts, 5 rebs) got off to a great start Tuesday night. Porzingis hit his first three shots, including two from downtown. Defensively to start, the Knicks had a hard time fighting over or through screens. Brooklyn was able to get wide open outside shots. New York needed to find an answer to solve their screening defense, otherwise it would be a long night from beyond the arc.

When Porzingis went to the bench for his regular resting period, Michael Beasley (12 pts, 13 rebs) continued his stellar play as an effective scorer off the bench. Although Tuesday night, Beasley made his presence known on the boards. The Knicks tightened up their perimeter defense to close out the quarter, and held a 30-22 lead at the end of the first quarter.

In the second quarter, the Brooklyn offense sputtered as they only scored two points in the first four minutes. It’s during periods like this, where its painfully apparent that Brooklyn needs a superstar. There isn’t someone on that roster that is a go-to scorer that can pour it on an opponent.

Enes Kanter (20 points, 20 rebounds) played like a beast on both ends of the court. Kanter’s tenacity on the boards energizes his teammates and the Garden faithful. The fan favorite had a double double going into halftime, which gave you the notion he was in for a huge game. New York rode the strong efforts of Kanter and Porzingis to a 61-41 lead going into the locker room.

New York picked up right where they left off to begin the second half. On an early possession, Kanter blocked a shot, started and ran the fast break which ended with an emphatic dunk. However, Brooklyn retaliated with a huge dunk by Quincy Acy over Kanter. This dunk breathed some life back into Brooklyn as the Nets started to play with a little more spirit on the defensive end. The defense of Brooklyn created transition opportunities, that they cashed in on to make a late run.

Brooklyn continued to fight into the fourth quarter and cut it down to as low as 11 with five mins left in the game. In the end, Beasley and Porzingis helped to put the game on ice. New York picked up their second straight win 111-95, and swept the season series over the Nets.

The Knicks will look to take the successes of their last two games, and shoot for their third straight win Wednesday night. Luckily for the Knicks, the Boston Celtics (36-15) will be without Kyrie Irving (Quad) Wednesday night. This should help them to improve on their dismal 7-19 road record.