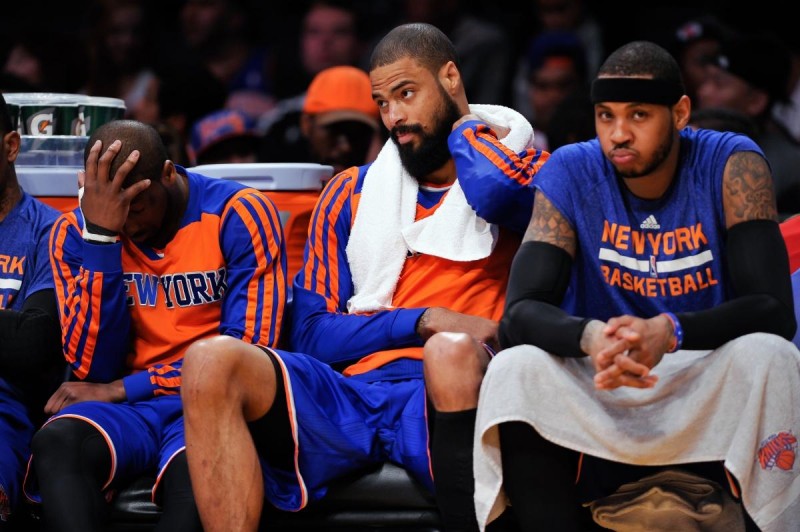 New York’s playoff push landed them in LA to take on the Lakers for the first of a crucial 5 game west coast trip with the team trailing Atlanta by 2 ½ games for the 8th and final playoff spot. Before the game Carmelo Anthony said it was the “biggest game of the road trip.” Iman Shumpert returned to the lineup after missing the team’s last game due to illness.

It was a promising beginning for Mike Woodson’s club as they held the LA to just 14 first quarter points. Even with Anthony misfiring on all 6 of his shots in the first, NY was able to hold an 8 point lead after one period of play. From there, the two teams would have a metamorphosis. The Knicks reverted back to the team that blew a 17 point lead at home to the Cavaliers while LA played like the team that was making a push for the postseason.

The Kobe-less Lakers went on a 22-4 run with Xavier Henry and Kent Bazemore doing their best renditions of the “Showtime” Lakers. Woodson ripped into his lackluster team following a timeout but that did little to help his team’s uninspired play. The Lakers would shoot an unfathomable 75% in the 2nd, including 6-7 from downtown. All that after shooting only 28% in the first when it seemed as if they were content with just going through the motions.

If you’re a Knicks fan and were still up to watch what transpired in the 3rd quarter, you probably watched in anguish. It was an absolutely horrific display of basketball for a team that still had playoff aspirations. After a while it became comical as LA would do whatever they wanted against a team who had lost its willingness to compete. When it was all said and done LA would boast a 51 point quarter. To put that ridiculous number into perspective, it was both the most points ever scored in a quarter for the Lakers and the most points ever surrendered in one for the lifeless Knicks.

The outcome of the game was obviously never in doubt from there as the two teams essentially played extensive garbage time for about the final 18 minutes. At one point Woodson who was clearly out of answers decided to have his team play a zone defense. That move even had Knicks Hall of Famer and broadcaster Walt “Clyde” Frazier question why he would choose a zone when the Lakers were obliterating NY with its salvo of three pointers. When it was all said and done LA would connect on 18 triples on 28 attempts.

Embarrassing was the word most associated with the performance if that’s what you would like to call it. New team President, Phil Jackson was even in attendance at his old stopping grounds to get a first-hand look at the disaster he recently inherited and is now in charge of turning around. After the game Jackson’s adjective to sum it up was “awful.” The Knicks have a quick turnaround as they next travel to Sacramento to take on DeMarcus Cousins and the Kings later on tonight.

Notes:
Lakers shooting slash line was an astonishing 58/64/87
LA had 38 assists on 48 field goals
Both teams had 5 players score in double figures