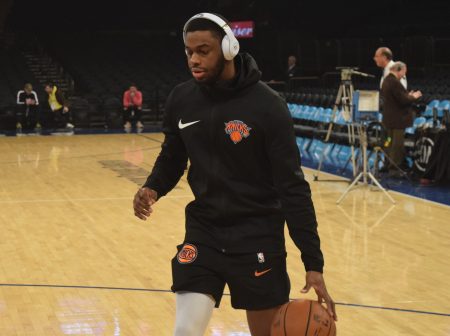 NEW YORK CITY, N.Y. – The New York Knicks picked up a quality win over the Boston Celtics, prior to a match-up with the New Orleans Pelicans. Friday night, the Knicks looked to make it back-to-back wins for the first time in this young season. Back on Nov. 16, New York lost to the Pelicans in New Orleans in a game that they lead for most of the contest. The Knicks have had several games like that this season, in which they haven’t been able to close the case in the 4th quarter.

Friday night was different however, as the Knicks outscored the Pelicans 27-19 in the 4th quarter. They used this late surge to propel them to a 114-109 victory at Madison Square Garden. This win was huge for New York to regain some momentum, heading into a tough contest in Memphis on Sunday. The Knicks now hold a 6-14 record on the season, and have looked to take a big step in the right direction. Here are a couple takeaways from the Knicks impressive performance against New Orleans:

The Knicks will look to make it three straight wins, as they will face the Memphis Grizzlies (12-6) Sunday afternoon. New York hopes to improve on their unimpressive 3-8 road record this season.