The New York Jets Were Defeated 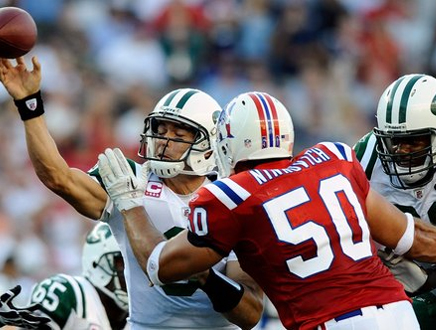 The New York Jets were defeated by the New England Patriots. The win increased New England’s record to 4-1, while the Jets have dropped to 2-3 and are now in the midst of a three game losing streak. In the first quarter, Patriots Running Back BenJarvus Green-Ellis rushes for a 3 yard touchdown on 2nd and 2 at Jets 3. During this quarter the Jets were unable to get a 1st down. Going into the second quarter, New England posted 7 points on the board in the previous quarter and were looking for more. At the 9:55 mark, Jets Wide Receiver Plaxico Burress was able to get a 1st down for his team. Some plays later, Jets Running Back Shonn Greene runs 3 yards for the 1st touchdown for Gang Green.

On 2nd and 10 at New York Jets 11 Tom Brady throws an incomplete pass intended for Tight End Aaron Hernandez which was intercepted by Corner Back Antonio Cromartie to end the half.

At the beginning of the second half Tom Brady threw a 2 yard touchdown pass to Wide Receiver Deion Branch. When the Jets received possesion, Sanchez threw a pass to Kerley for 9 yards which led to a touchdown.

On 2nd and 3 at NYJ 3, New England’s Green-Ellis was the receipient of a 3 yard touchdown pass from Brady. This was the second touchdown for Ellis. The score was now Patriots-24 and Jets-14.

Going into the fourth quarter with the Patriots leading 27-14,New York needed some runs and good decision making from QB Mark Sanchez, and that’s what they got. On 3rd and 7 at NE 21, Sanchez connects with Santonio Holmes for a 21 yard touchdown pass which brought the Jets within 6 points after a completed field goal by Nick Folk. When New England had possession, the Jets did everything it could to prevent the Patriots from scoring a touchdown, it worked as the Jets only allowed 3 points which came off a Stephen Gostkowski 28 yard field goal.

With 1:02 remaining in the game, the Jets needed a miracle to try and make this game close enough to win. On their first play, Sanchez hit Holmes for 9 yards and on the following play Sanchez threw a deep right pass to Kerley for a gain of 22 yards.

On 2nd and 10 at New England 49, Sanchez threw a incomplete pass to Burress and on the next and final play of the game, Mark was sacked by Defensive End Mark Anderson.

The quarterback matchup of Tom Brady and Mark Sanchez was intriguing, Brady had a game high 321 passing yards to go with 1 TD and Mark Sanchez threw for 166 yards which included two touchdown passes and no interceptions.