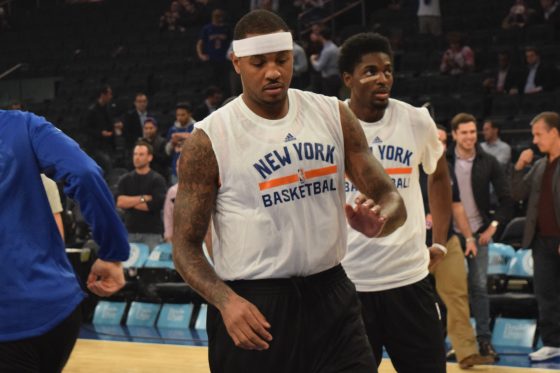 NEW YORK CITY, N.Y. – The New York Knicks (21-29) have had a tough season to say the least. It has been a season of frustration, and confusion in New York. For a team that had such high aspirations, it seems the Knicks would settle for just limping into the playoffs. To make matters worse, it seems every other day Carmelo Anthony is the topic of discussion in trade rumors. Knicks president Phil Jackson has expressed to the media that he is “determined” to move Anthony by the trade deadline (Feb.23).

The Knicks contacted the Cleveland Cavaliers, Boston Celtics and Los Angeles Clippers in trade discussions for Anthony. According to ESPN‘s Marc Stein and Chris Haynes, Cleveland rejected an Anthony for Kevin Love trade offer. Gary Washburn of the Boston Globe, reported that Celtics’ president Danny Ainge “has rejected any trade” for Anthony. ESPN’s Frank Isola reported that the Clippers were unwilling to trade Chris Paul, Blake Griffin or DeAndre Jordan. According to various sources, the Knicks and Clippers are trying to find a third team to make a blockbuster deal involving Anthony to L.A.

Ultimately, Anthony holds the upper hand and final approval of any trade the Knicks propose. Anthony would need to waive a no-trade clause in his contract, which could come back to haunt Jackson. The teams that can trade for Anthony are very limited, considering Anthony wants to play for a contender. The problem is that few championship contending teams are willing to trade anything of value to New York for Anthony.

Anthony has expressed that family is a major thing to consider in his decision to waive the no-trade clause.

“That’s more about what I care about, my family,” Anthony said following Tuesday’s shoot-around. “My son being comfortable in New York at an age now where he’s really getting an opportunity to understand being in New York and having a home there and having friends there. My wife working there and having her opportunities there. I think about that more so than my decision for my career.

“At the end of the day, it will come down to my decision. But I think more about my decision and what they’re going to have to go through if anything would happen.”

Amidst all the trade talk, Anthony has done nothing but produce for the Knicks. In his last 10 games, Anthony is averaging 27.1 PPG, 6.4 RPG and shooting 49% from the field. Fans may be frustrated with the Knicks’ recent struggles, but Anthony has went out and competed well under the toughest of circumstances.

New York may want to move Anthony, but Anthony may very well stay in New York. Other teams just don’t have appealing enough pieces that will be of equal trade value for Anthony. Anthony loves New York, and could decide that is more than enough reason to stay.