Beckham Puts On A Show At Pro Bowl; Reveals Injury 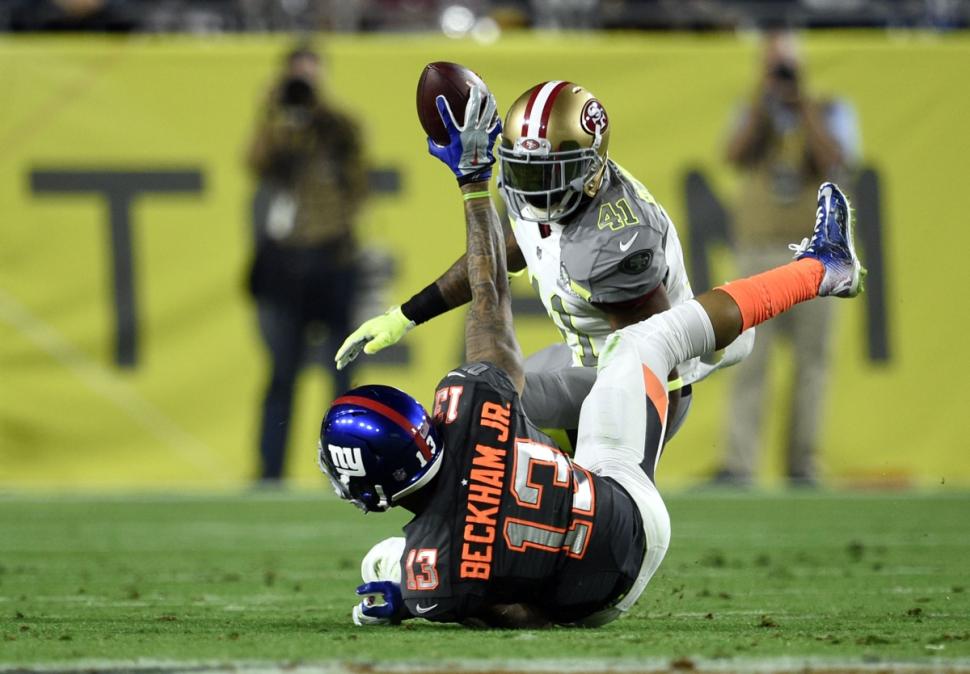 Giants first year wideout, Odell Beckham Jr continued to show off his freakish athletic ability at the 2015 NFL Pro Bowl on Sunday. Drafted by Team Irvin in the Pro Bowl draft Beckham treated the game like any other and that includes the warmup routine. The rookie’s warmup routine has gone viral multiple times this season and just in case the people of Arizona weren’t aware of the guy, they were after Sunday. #13 was grabbing one handed catches out of mid-air and he even kicked a 40 yard field goal through the narrowed uprights and had everyone in the stadium amazed, including himself.

But, that was just warmups. Beckham made the play of the night with his 48 yard grab that seemed like an incomplete pass far out of the reach of the LSU product. The Giant’s wide receiver promised a one handed grab in the game after being drafted by Team Irvin, but that was far better. Again Beckham Catch was trending on social media.

“Stafford just put it out there,” Beckham said. “I saw it late and it was kind of breaking left, so I just broke and dove after it and thankfully I came up with it.”
Beckham caught five passes for 89 yards.

With Beckham’s crazy season and pro bowl performance many people are already trying to compare him to Michael Irvin. Beckham had the opportunity to be coached up by him this week and couldn’t have been more appreciative.

“That meant the world to me,” Beckham said. “I mean, you’re talking about a Hall of Famer and one of the best receivers of all time. To know that he thinks I have a bright future feels great.”

The first-rounder caught 91 passes for 1,305 yards and 12 touchdowns, including four games in which he caught at least 10 passes. Oh and did I mention he missed the first four weeks of the season? If that’s not enough he also forgot to tell us that he was playing the rest of the season with torn hamstrings!! The talent is through the roof with Beckham and one can only imagine what he could possibly do when he’s fully healed.