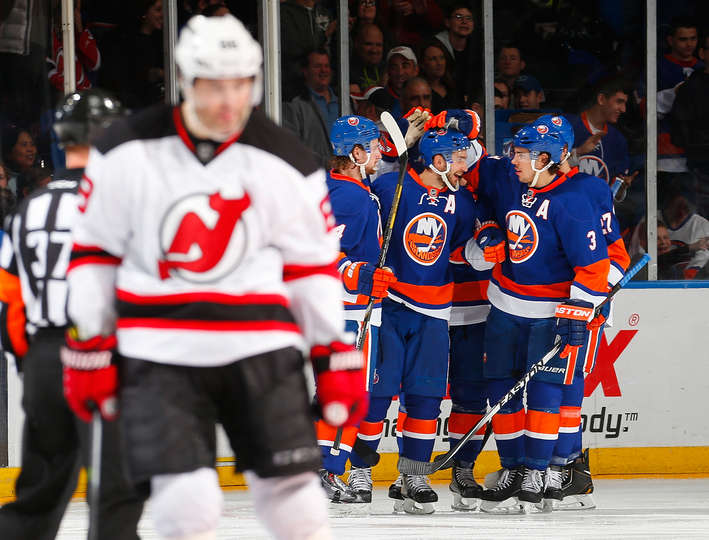 Hanging on to slim playoff hopes the Devils have been receiving a bit of scoreboard help going into Saturday night’s divisional game on Long Island. New Jersey made the trip onto Long Island without Captain Bryce Salvador. With the added emphasis on the final 9 games of the season, this game could have been considered a trap game for the Devils, especially with the Islanders missing their best player John Tavares. With the schedule coming to a close on a condensed season, Coach Deboer elected to go with the fresh goalie, Cory Schneider.

New Jersey continued their sluggish starts in the first period against division rival Islanders. New York spent much of the first 10 minutes in the Devils defensive zone, registering 3 shots on goal to the Devils 1. With 5 of their top players out with injuries, the Islanders seemed to have a hungry young team that went out looking to make names for themselves. The young Islanders were aggressive and came out hitting, and causing the Devils to overpass for much of the first period. The Devils tried to reciprocate the aggressive play as Ryan Carter was called for boarding at 15:45. The Devils continued their dominance on the penalty kill as the penalty time expired. At the end of a scoreless first period the Islanders led in shots 9-2.

The second period started with a similar trend for the Devils. New Jersey came out with more energy and with more desire than the first. Travis Zajac had the best scoring chance of the game shortly into the second period that he would ring off the post. Much to the dismay of the Devils the Islanders came right back down the ice and took the lead on Frans Nielsen’s 23rd goal of the season, assisted by Josh Bailey at 2:12 of the second period. Although being down a goal the Devils continued to push and eventually broke through with the tying goal at 10:20, Adam Henrique’s 25th goal of the year, assisted by Damien Brunner and Patrik Elias. The Devils ended the second period with 13 shots for the first two periods.

The third period started with the same energy from both teams. The game continued on a 1-1 stalemate when defenseman John Merrill took a puck off the face at 7:07. The injury left the Devils down 1 defenseman and a forward as Stephen Gionta left earlier in the period with an apparent leg injury. The Islanders being infused with 10 rookies tonight showed energy for the full 60 minutes. The Devils matched intensity and for the second straight game found themselves in overtime.

The Devils started the overtime period with the same 4 skaters as last game that worked so well but came up just short. New Jersey seemed to be content taking their time setting up plays each time down the ice throughout overtime. The Devils outshot the Islanders 4-1 in overtime. The Devils went to their second straight shootout and as it has been all season long cannot even find a shootout goal. The Devils lone shootout goal is from a player who is not even on their current roster, Reid Boucher.

The Devils miss out on a second point for the second straight game, and as the schedule quickly dwindles down the need to win these games becomes more obvious. They cannot settle for 1 point, especially with the help they are getting on the scoreboard nightly. Had the Devils converted even just 4 of the 10 shootouts they’ve lost this season they would be just 1 point out of a playoff spot.