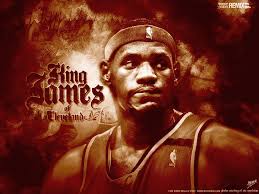 All Hail The King

To describe the professional basketball career of LeBron James, beginning from his rookie season until now in one word can be difficult. He came into the NBA immediately after graduating from high school.  He entered the league at a very early age with an impossible amount of expectations placed upon his shoulders before he even stepped on an NBA court.  He was a hometown star and was drafted by his hometown team the Cleveland Cavaliers.  He then would leave his beloved city after a few seasons, lured by his eagerness to win a championship (with the Miami Heat) only to leave that team to return home.  He is hated by some and loved by many.  But what cannot be denied is LeBron’s ability to play the game he loves with passion and energy.  That endearing quality that has led him to a successful and almost certainly hall of fame career.  Fans of his and even those that view him as the villain should appreciate what he brings to the NBA before he decides to call it a career and leaves us all wanting more.

LeBron James has now been to the NBA Finals five consecutive years, four with the Heat and now with the Cavaliers.  His return to Cleveland has been unquestionably successful thus far. This season at age 30 and after playing 10 NBA seasons LeBron averaged (in the eyes of some) a pedestrian 25 ppg, 6 rebounds and 7 assists. LeBron played in 69 games this season while leading his team to the playoffs.  For those that critique every aspect of his game, those numbers were “un-LeBron like,”.  He for whatever reason was not his dominating self at the beginning of the season.  At times he seemed uninterested and bored during early on.  He just came off his fourth finals appearance, meaning he has played 82 plus games for four straight years, you can also throw in the games he played internationally for the US national squad.  He has played a lot of basketball.  Some fail to realize that unless LeBron was delivered to earth on a rocket ship, he is a human being.  As much as he trains and practices, he is not immune to fatigue and the wear and tear of playing an NBA season and postseason for four years consecutively.

LeBron has been compared to many of the NBA greats, Michael Jordan and Magic Johnson just to name a few. Some say that he is a combination of both.  In the end however, LeBron James is LeBron James. Standing at 6-feet 8 and weighing and 240 pounds he is a physical specimen to behold. How can one with his size move with grace and power on the basketball court? Have we truly seen a player with his ability at his size in the NBA? LeBron can play all five positions on the court if called upon however like in his early days in Cleveland he is viewed as a point forward. With his size and ability to handle the ball most defenses have a very difficult night when he is on the court. As far as the comparisons to Michael Jordan, I believe it unfair to compare the two players, especially if the comparisons are about what they do on the basketball court. Michael played the 2 guard position and was much more of a score first guard, James as we discussed plays multiple positions and is a very capable scorer however he is much more comfortable setting up his teammates for success. This was a point of emphasis for those that questioned LeBron; they believed him to be too passive in the big moments unlike Jordan, however he has seemed to be successful thus far. Those that criticize James for passing why not question Michael for not passing in similar situations? It took Jordan quite a long time to realize that he didn’t have to do it all by himself and to trust his teammates. What we should be comparing is what LeBron and Michael accomplished off the floor as far as globalizing the game and being marketing tools for the league. Both players excelled in that category. An argument can be made that LeBron has been just as much as an influence to this generation of fans and players as Jordan was to his. Jordan globalized the game in the 92 Olympics and LeBron continued the tradition. LeBron ‘s sneakers are the best selling athlete sneakers while we all know the history of Air Jordan’s so there is no need to discuss that further. LeBron may not reach those numbers but he is doing fairly well.

LeBron is clearly the face of the league, he is the best player by all accounts and his presence alone in Cleveland and on any other NBA court draws large crowds and revenue. He has quite a few notable endorsement deals; Nike, Samsung, Sprite, Kia Motors and the watch company Audemars Piguet that has made him one of the highest paid athletes in all of sports. His televised games especially against some of the other star players in the league brings great ratings to the NBA, which in turn has led the league to a new, and lucrative television deal. LeBron brings more than just basketball he is a marketers dream, not only can he perform on the court his smile and persona has transcended the sports world. LeBron James is a household name and his return home has helped the economy recover to levels that they were when he was first playing in Cleveland.

To appreciate LeBron James we must look no further than this season, he went back to Cleveland to form another big three with rising stars Kyrie Irving and Kevin Love, rookie head coach in David Blatt and a level of uncertainty that he has not experienced since his first time with his former big three in Miami. This time however there was no ‘decision,” no parade, no party and no promise of 3 or 4 or 5 championships this time James kept the move professional and tact. This season LeBron led his Cavaliers to the playoffs and to the NBA Finals; along the way there were changes to the roster and injuries in the playoffs to both Kyrie and Kevin with Love being sidelined for the remainder of the playoffs. His clutch performance against the Chicago Bulls and his dominance of the Atlanta Hawks has shown that he will be an all time great when it is all said and done. He is a certified hall of famer if he were to quit playing today.

Standing in his way in his quest to bring an NBA championship to Cleveland are the Golden State Warriors, LeBron heads into this match up without Kevin Love and with Kyrie not at 100 percent, this means that he will have to be more aggressive on the offensive end of the court and will also look to make a stamp on this game defensively.