Giants extend winning streak in 27-13 victory over the Browns 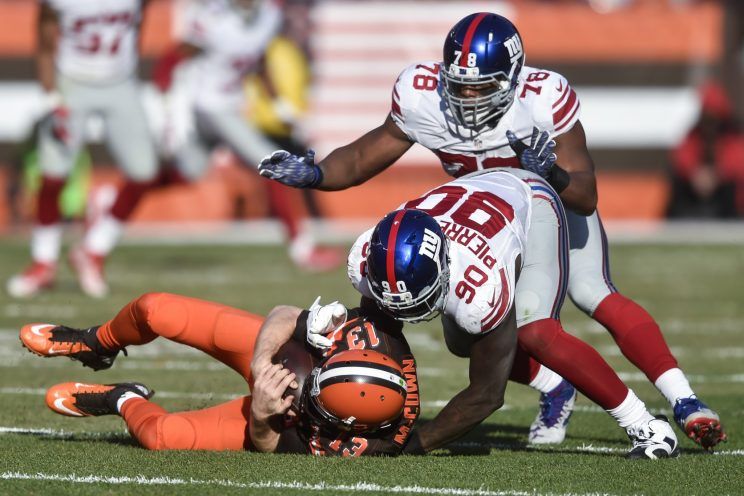 The game began with the Cleveland Browns kickoff sailing out of bounds giving the Giants excellent field position to start the game.  Despite beginning their series on the forty yard line the Giants quickly turned the ball over downs without gaining a single first down.  On third and long Odell Beckham Jr. appeared to beat cornerback Joe Haden down the right side but Eli Manning‘s pass was too long.   The Giants defense came out and proceeded to limit the Browns offense to 24 yards on 6 plays to force their first punt of the day.  On the Giants second series the offense had a little more success moving the ball and gained 29 yards and a pair of first downs before Brad Wing came onto the field for another punt.  As the first quarter came to close with no points on the board for either club.  Unfortunately for the Giants right before the end of the quarter as they were driving down field Beckham made a catch and appeared to injure his hand, but nonetheless returned in the second quarter.

The Giants continued to move the ball as the second quarter opened using a balanced attack.  The drive saw Rashad Jennings rush the ball six times for 23 yards but on a pivotal third down and one Jennings was not able to pick up a first down to keep the drive alive.  The Giants defense continued to shut down McCown and the Browns’ offense but through four possessions the Giants offense were stifled by a strong effort from the Browns defense, forcing them to punt four times.  On the second play of the Browns following possession running back Isaiah Crowell fumbled giving the Giants great field position on the Browns 31 yard line.   On first down Manning found Roger Lewis for an 18 yard reception putting the ball on the Browns’ 13 yard line.  The Giants wasted little time after the completion and Manning capitalized on the turnover throwing a perfect pass to Dwayne Harris in the left corner of the end zone.  The two plays took just 42 seconds off the clock and gave the Giants a 7-0 lead after Robbie Gould’s extra point.  After another defensive stop by the Giants, punt returner Bobby Rainey trotted onto the field.  Britton Colquitt’s punt was muffed by Rainey and recovered by the Browns on the Giants 32 yard line.  The Giants defense limited the damage to a field goal, cutting the Giants lead to 7-3.   The Giants offense got the ball back with one minute and forty three seconds remaining in the half and quickly padded their lead.  After an incomplete pass intended for Victor Cruz, Manning found Cruz on second down found for a 37 yard completion down the right sideline.  Two plays later Manning found Beckham running across the middle of the field for what initially appeared to be a short gain but Beckham quickly turned on the jets and with one cut was already running up field.  The play ended with Beckham scoring his 7th touchdown of the season, extending the Giants lead to 14-3.  When the Browns got the ball back they quickly drove down field, aided by a pass interference penalty on cornerback Eli Apple.  McCown found Terrelle Pryor Sr. twice on the drive for gains of 14 and 22 yards.  The Giants defense managed to hold the Browns for a second time in the red zone to a field goal.  So as the clock ran out the Browns pulled a bit closer, making it 14-6 Giants as the teams headed into the locker room.

Following the Browns first possession of the second half, which ended quickly, it was clear that the Giants were continuing to try and get the running game going.  After a first half that saw the Giants gain only 33 yards on the ground it was clear that the offense would aim to bring about a more balanced attack going forward.  The Giants were held to a three and out on their first series which didn’t allow for Jennings or Perkins to get onto the field for very long.  The Browns defense held the Giants to just 2 yards on their next possession forcing another punt.  Over the course of the third quarter the Giants offense gained just 30 yards in their three possessions.  The 14-6 lead remained intact as the fourth quarter began.  A fifty four yard punt return for a touchdown by Beckham was negated by a penalty on Mark Herzlich.  The Giants took over near midfield and proceeded to go three and out again, gaining just two yards on a run by Perkins on first down.  Through four possessions in the second half the Giants offense failed to get into any kind of rhythm whatsoever.  The Browns took over with just over 12 minutes to go in the game looking to pull closer.  On first down McCown found Pryor on a deep route in the middle of the field for a 41 yard gain.   Two plays later McCown stepped up into the pocket to make a pass and was hit as he was following through.  The ball popped into the air and Jason Pierre-Paul grabbed it and took it 43 yards for a touchdown.  It was yet another big play for Pierre-Paul who already had two sacks on the day.  Robbie Gould missed the extra point, which made it 20-6.  The Browns offense took over and quickly scored their first touchdown of the game.  The 5 play, 75 yard drive was capped by a 21 yard touchdown reception by wide receiver Corey Coleman.  The drive only took two minutes and forty one seconds off the clock, putting pressure on the Giants offense to put together one successful drive in the second half.  Lo and behold that drive would come following the Browns first touchdown drive of the game.  Manning proceeded to lead the Giants on a 6 play, 73 yard drive that took just over three minutes.  It was highlighted by a 41 yard reception to Beckham and a 22 yard end around to Sterling Shepard, who finally got a chance to get involved.  The drive culminated with a 4 yard touchdown pass to Beckham, his second touchdown reception of the game.  The score extended the Giants lead to 27-13 with just over five minutes remaining in the game.  The Browns offense came back onto the field hoping to put together another scoring drive but the Giants defense did what they’ve been able to do all season long, which is to say come up with the big stops when they need to.

The Giants would hold on for their sixth straight win, by a score of 27-13, winning by 14 points, their largest margin of the season.  The victory keeps the Giants 2 games behind the Cowboys with a head to head matchup in just two weeks at Metlife stadium.  The win also extends their lead in the wildcard playoff picture ahead of the Redskins and the Vikings.

The Giants defense played a big role in the win, picking up 7 sacks on the day and holding the Browns to just 13 points.  McCown was pressured frequently and defensive stalwarts Jason Pierre-Paul and Olivier Vernon made their presence felt for a third straight week.  Vernon had a 1-and-a-half sacks as well as five quarterback hits on the afternoon.  While Pierre-Paul was all over the field making impact plays throughout the game.  He had two forced fumbles, three sacks, and an interception return for a touchdown.  The Giants defense continued to be a decisive factor in yet another victory.  The dynamic Odell Beckham Jr. had a great day with six receptions for 96 yards and two touchdowns.  He also had a punt return for a touchdown which was called back on account of a penalty, nonetheless his effort enabled the Giants to extend their lead in the fourth quarter and put the game out of reach.