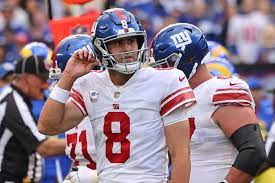 The New York Giants’ new-look offense has had good days and bad days in their first training camp under Brian Daboll.

As the team gears for their second pre-season game of the season, the hope among many Giants fans is that the offense would continue to take impressive strides every day and show a semblance of consistency as the days get longer.

While not all his fault, Daniel Jones will be under the limelight for the poor showing from the offense. Especially if his backup looked significantly better than him running the second team.

The Giants aren’t going into the 2022 season with a quarterback controversy. Jones, to his credit, has also had excellent practices this camp. But it does not take away from the fact that consistency is something that continues to elude the former first overall pick, while his backup is all too familiar.