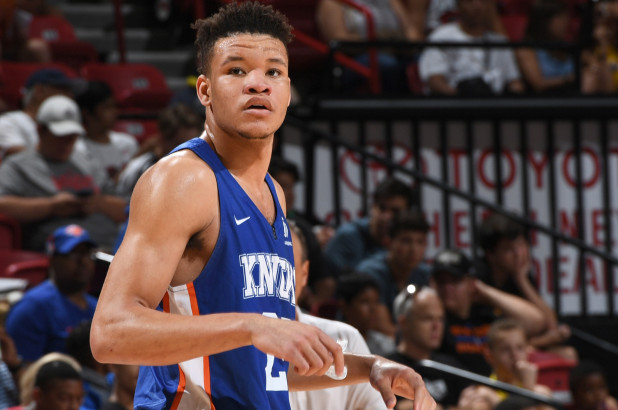 For Kevin Knox, his summer league was the start of him reshaping the narrative created around him and the New York Knicks. Projections often talk about the expectations we set for these players before they take the court. Based off a small sample sizes with his time at Kentucky, we thought we had an idea of what type of player Knox would be like.

Knox far surpassed those expectations during NBA Summer League. He averaged 21.3 points and 6.5 rebounds, including 36% from the three-point line.

He showed he could finish at the rim and shoot outside. His outstanding play earned him All-NBA Summer League First Team Honors.

When speaking to Marc Berman of the New York Post, Knox again challenged expectations, this time for his team.

“I saw that. People are sleeping on us with the 29 wins,” he said. “I think we definitely can win at least 35 and get in that playoff talk. That’s my personal opinion. Everyone has their own opinion. But the whole team, I’m pretty confident we’re really good this year, that we have a chance to make the playoffs.”

Even with the Knicks adding talent such as Kevin Knox and the signing of Mario Hezonja, it’s hard to see them making the playoffs next year. With Kristap Porzingis out at least until January, the Knicks have few paths to the postseason.

Teams such as the Celtics, Raptors, Bucks and Sixers are virtual locks. While teams with far more experience will be contending for the final four spots remaining in the Eastern Conference.

That doesn’t make all of what Knox said untrue however. With the Knicks winning 29 games last season, an increase to the 35 win range Knox spoke about still seems likely.

The Knicks front office and new Head Coach David Fizdale all are looking at this season as an opportunity for Kevin Knox and the young players to develop their skills.