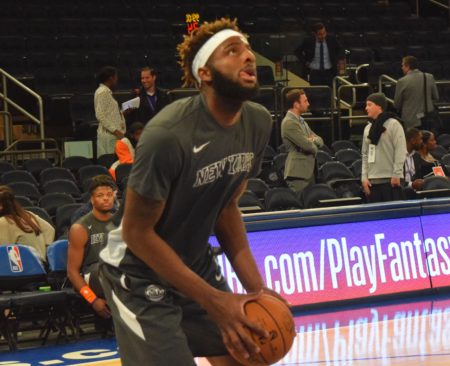 NEW YORK CITY, N.Y. – The New York Knicks have much excitement and anticipation surrounding the beginning of their 2019-20 NBA season. There have been a bunch of new acquisitions this past off season, which added veteran leadership and a toughness that this team is looking to embrace. Knick faithful hope that this can help translate to more wins this season.

A huge part of building that winning culture, is establishing a rhythm during pre-season. Wednesday night the Knicks faced off against the Atlanta Hawks, looking to work on that team rapport. Both teams are in a rebuild, and presented an interesting and entertaining match-up.

To start the game, New York really impressed with how they moved the ball. Guys were driving to not only score, but to create shot opportunities for other Knick players. New York assisted on eight of their first 10 field goals.

Bobby Portis (16 points, 7 rebounds) paced the Knicks in the first quarter, and showcased an improved three point shot. New York as a team showed that they have improved their shooting from beyond the arc. In the first half, five different Knick players hit from downtown.

New York shot 40% from the field in the first half, and worked for quality shot opportunities. That was something that hindered this team last season, and already they look much improved with their shot IQ.

Defensively, the Knicks were sound for most of the first half. New York however seemed to lose a handle of their perimeter defense, as Vince Carter (17 points) exploded for 14 points in the second quarter. Atlanta used the boost from their seasoned veteran to take a 61-54 lead into halftime.

The second half was tightly contested, as both teams struggled to pull away from each other. Julius Randle (20 points, 8 rebounds) really impressed with his athleticism and elite finishing at the rim. Randle looked like he was in mid season form, and has a complete skill set creating his own shot. The Knicks are really going to lean on his scoring production this season.

A lot of people have been wondering what they were going to get from lottery pick, RJ Barrett (12 points, 7 rebounds). Barrett showed us Wednesday night, that at an early stage in his career he plays with good pace. The rookie never seems out of control, especially with the ball in his hands in transition.

Trae Young (23 points, 9 assists) emerged as someone that the league is really going to have to take notice of. In the first half, Young affected the game with his scoring prowess. The second half, Young gave the Knicks fits with his keen passing ability. The Hawks drew from Young’s energy, to extend their second half lead to as much as 11 points.

New York made it very interesting in the fourth quarter, using the strong defensive play from Frank Ntilikina (2 points, 3 assists) to vault them back in the game. Ntilikina made it difficult for Young to get the penetration he was getting most of the game.

The Knicks took a one point lead late in the fourth, but squandered it to a backbreaking three pointer from Carter. Once the Hawks took the lead back, they didn’t relinquish it as they came away with a 100-96 victory in Madison Square Garden.

Even though the Knicks lost, they showed their fans that this year will be far different from last year. It’s still very early, but you can see this team is building confidence playing with each other. Dennis Smith Jr. (4 points, 3 assists) talked about how much fun he’s having playing with this group. There will definitely be growing pains, but there is hope in Gotham.

Barry Holmes is a Senior Writer for PureSportsNY.com.