Knicks Let Another Win Slip Away 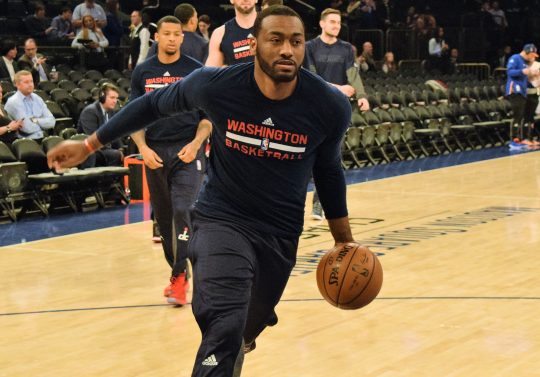 NEW YORK CITY, N.Y. – The New York Knicks have struggled all season long to consistently play 48 minutes of solid basketball. January has been a hard month for New York, especially with closing out games. The Knicks posted a 3-7 record in the month of January, before squaring off against the Washington Wizards. Three out of the seven losses were by one point; and two were from opposing buzzer-beaters. The variety of ways the Knicks have lost, has been disappointing and frustrating. Thursday night’s game against the Wizards, would be no different.

During the second quarter, Carmelo Anthony put on a show in Madison Square Garden. Anthony set a franchise record for most points in a quarter (25). The Knicks didn’t have someone score 20+ points in a quarter all season long. Anthony put his entire offensive repertoire on display, and almost outscored the Wizards (28) by himself. This incredible scoring outburst vaulted the Knicks from a 13 point deficit, to a 67-66 advantage at the half.

Otto Porter Jr. took his turn to get hot after halftime. Porter Jr. scored 15 third quarter points, and shot 4 for 5 from beyond the arc in the quarter. Anthony on the other hand, could not replicate what he did in the second quarter. The Knicks’ franchise player went completely cold (0-4 FG) in the third quarter. New York got out-scored 19-34 in the third quarter, which led to a 100-86 hole going into the final quarter.

The Knicks still had a chance to tie the game with :13 seconds left, but were unable to get a shot off. Courtney Lee had a wide open shot opportunity, but pump-faked and passed it out. Brandon Jennings received the pass, but got it knocked away by Wall as time expired.

When asked why he didn’t shoot the ball, Lee told reporters he heard someone yell as if they were coming to play help defense. Wizards assistant Sidney Lowe was shown on replays on the court, questionably close to Lee. Though this may be true, Lee still has to shoot that ball with confidence. Instead, the Knicks lost 113-110 to the Wizards in heartbreaking fashion.

The Knicks have lost 12 of their last 15 games, and fallen to a 19-25 record. New York also dropped to 1-9 on the season, in the second game of back-to-backs. The Knicks will look to turn it around Saturday night, against the Phoenix Suns (13-29). If the Knicks can not string together some wins soon, this season will be over before the all-star break.