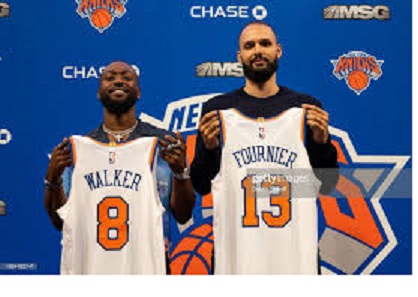 NY Knicks: With Walker running the offense and R.J. Barrett and Fournier complementing one another beautifully on opposite wings, there’s plenty to love about an offseason that, otherwise, felt pedestrian. And better still, there’s more to love about the team that underwent those changes.

Can Walker stay healthy? Though he’s long been hampered by knee injuries and scoring droughts (largely because of those injuries, mind you), Walker is an added motor to one of the league’s slowest offenses, not to mention one that lacked dependable and willing shot creators not named Julius Randle. That’s what ended up killing the Knicks in the playoffs; when Randle was stifled, the other four players on the court lacked the pure scoring ability that Kemba can bring right away.

The same goes for Fournier, despite my hesitation about his contract. My skepticism says less about what Fournier’s fit and capabilities on this team will be and much more about what signing him, in a vacuum, meant for the Knicks’ future.

Walker can take on the role of the offensive architect, a player Tom Thibodeau’s squad sorely lacked when all they’d done was drop the bag on the former Magician and one-time Celtic. Fournier, instead, now gets to serve as the shooter-slasher combo, further doing what he showed flashes of while he was in Boston.