Last Of a Dying Breed 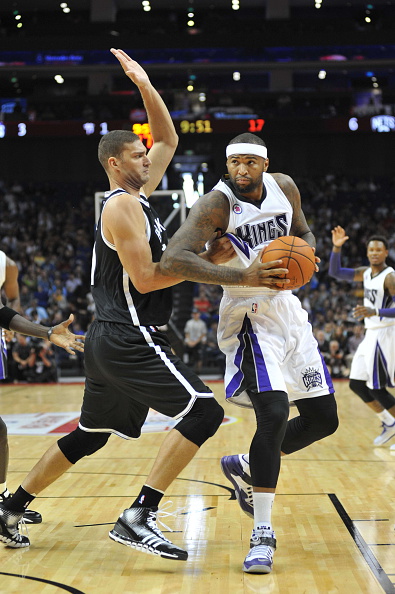 Bill Russell, Kareem Abdul-Jabbar, Shaquille O’Neal, Hakeem Olajuwon and Wilt Chamberlain were the cornerstones of the franchises that they played for during their careers. They all also shared another similarity. They were all centers, they were the big men on the court, and they patrolled the paint making sure that the offensive players thought twice before driving down the lane. When their teams needed a bucket they sealed their defenders, raised their hand and got the ball. As I look around today’s NBA I ask myself, where is the man in the middle?

There are a few true centers still playing the game, Brook Lopez, Pau Gasol, Marc Gasol are the few that come to mind. Then there are players that play the five position but do not have the height that one would usually associate with the position. In the 90’s and early 2000’s every team sought a legitimate center to anchor their defense and control the paint, legitimate 7 footers were not a luxury for every team, so teams adjusted. Why did teams abandon their search for centers? One theory is that the centers slowed down the game and teams wanted to go smaller to speed up the game and to score more points. We can look no further than the 2015 finals. The Golden State Warriors downsized their starting line-up, playing their 7 footer Andrew Bogut very limited minutes as they sped up the game against the Cavaliers. It worked to perfection. They call it small ball. The Atlanta Hawks won 60 games this year and also had a smaller line up with an up-tempo offense. There are still 7 footers in the league however teams seem to rely on offense from their perimeter players. Very rarely we see players in the post these days that can score and put pressure on the other team to double which interestingly used to lead to open perimeter shots now teams just seem to gear their offense toward the perimeter.

Another theory is that there just aren’t that many skilled big men in the league. Players are coming out of college earlier and that could be a reason why some players lack basic skills as big men. They don’t have enough time to learn the game and are thrown into the NBA on potential against professional competition where the learning curve is short and swift. We can even look at high school players and the lack of teaching that many of the kids experience. Point guards are groomed, shooting guards are given the green light and the forward position has almost no definition because we are seeing players in the 6-8 to 6-10 height range with guard like athletic skills, that leaves little opportunity for those bigger players to learn post moves and learn how to dominate the paint. Why have offensive schemes become so reliant on the perimeter shot?

Teams are taking more 3 pointers during the game and relying on them as an important part of their offense. Players are running to the 3- point line on fast breaks more frequently, what was once a terrible shot in transition has now become acceptable. Its easy to say that 3 points are better than 2 when you have shooters on your team that can consistently make shots from behind the arc and the perimeter, however there are teams taking the 3 that really shouldn’t be, the New York Knicks took 20 three point attempts per game last season while only connecting on six of those attempts per game. They shot 34.7% for the entire season however they did not have a low post presence last season so they can be forgiven. The Houston Rockets do have an inside presence in Dwight Howard, although he was injured and inconsistent for most of the year he is still a player that dominated the paint at times, however the Rockets as a team took 33 three pointers per game only connecting on 11 per contest and shooting 35% for the season. The Brooklyn Nets with a legitimate center in Brook Lopez took 20 threes per game while only shooting 33%. When did this trend begin?

We can go back to the early 2000’s where we saw teams like the Dallas Mavericks and the Phoenix Suns play a more up-tempo style of basketball. The Suns especially during the first few seasons with head coach Mike D’Antoni, played a brand of basketball that was fast paced and exciting for fans to watch. Seven seconds or less was D’Antoni’s philosophy, a lot of shots with a lot of possessions. They sped up the offense and the rest of the league seemingly was not ready for that change. Their starting center was a young Amar’e Stoudemire who stood at 6-10, and was very athletic for his size and position. Amar’e averaged 26 ppg that season. He developed a very consistent perimeter shot, which allowed him to flourish in this fast paced offense. The team shot 39% from the behind the arc taking 2026 three’s on the season. Their small line up won 62 games that year and got them to the Western Conference Finals where they lost to a San Antonio team that slowed down the pace of the game and forced the Suns to play a half court game. Since then teams have been arming themselves or trying to with athletic forwards to speed up the game. Some teams however stuck to the belief that big men were necessary and continued with the formula.

What the league lacks now is a dominant big man, one who can demand double teams and dominate on both sides of the court. Someone who can grab boards and as former Center Shaquille O’Neal preaches, someone who can give you 30 points and 15 rebounds a night. There are a handful of guys that seem to have the potential to accomplish this, DeMarcus Cousins of the Sacramento Kings who averages 24ppg and 12 rebounds per game and Anthony Davis who is not a true center but at 6-10 averages 24 ppg and 10 rebounds and is freakishly athletic. Nikola Vucevic a very underrated center averages 19ppg and 10 rebounds for the Orlando Magic and at 7-0 has that true center look and power. Marc Gasol of the Memphis Grizzlies, Paul Gasol of the Bulls and Brook Lopez of the Brooklyn Nets round out the handful of players that can truly make a difference from the center position.

Cousins with his size and skill could easily be the best center in the game, the only question for DeMarcus is if he can control his emotions and just leave it all out on the floor. He is a passionate player however his passion often leads him to overreact in certain situations on the court. If he can shake his reputation as a knucklehead he should solve most of his on court problems. He had a great season however it did not translate to team success. DeMarcus demands double-teams, few can contain him one on one. Anthony Davis is not really considered a center however he does play the position occasionally. His athletic ability if off the chart and he has an offensive arsenal that seems to improve every year. Then there is Vucevic, he is not a household name but whenever I watched an Orlando game I was always asking my self where did this guy come from? He likes to bang in the middle and has a nice touch outside. The Gasol brothers, Marc and Pau are certified centers each bring intangibles to their position and team and both have very polished skills. Brook Lopez of the Brooklyn Nets is a legit 7 footer he has great offensive skills that could use some polishing however he must grab more rebound in order to be a dominant force for his team.

With the change in offensive philosophy and the lack of skilled big men in the league the center position is the NBA seems to be fading. Perimeter oriented offenses and teams utilizing the 3-point line have almost made the need for a scoring center almost nonexistent. The NBA is certainly changing to a more up-tempo style of play hopefully it does not lose one of its great positions along the way. I would love to see players in the post battling for position and using those long abandoned post moves. I would love to see great center matchups, Shaq versus The Dream, Mourning versus Ewing and Robinson versus Mutombo. This generation needs to relive some of these matchups to appreciate and respect the center position.

Where are the big men?