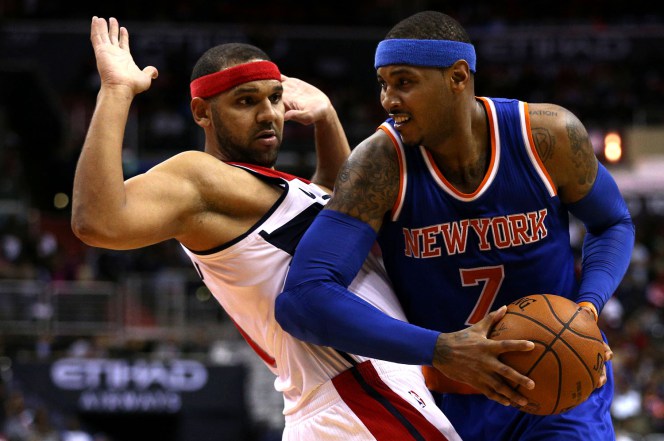 There was an interesting storyline heading into the game. Earlier in the year, Jared Dudley of the Washington Wizards stated in an interview that the Knicks’ Carmelo Anthony was the most overrated player in the league. He has since retracted that statement, but it was obvious that Anthony didn’t forget about those statements. Anthony  sarcastically stated that he heard about it.

Melo was on fire throughout the game. He missed his first two shots of the game then hit 8 consecutive shots. Dudley was guarding Anthony at different times during the game, and Melo made him pay every time he had the ball. Melo finished with 37 points and a throwback performance. He was 11 for 18 and pulled down 7 rebounds. He took the team on his back and dominated this game for the Knicks. Dudley finished with 0 points in 17 minutes on the floor. Melo’s message to Jared Dudley “Happy Halloween.”

The Knicks got excellent contributions from a number of players, Langston Galloway, in his second season, showed why he has so much potential. Galloway had 14 points and hit a big three in the 4th quarter to give the Knicks momentum to close out the game. Lance Thomas, in his second season with the club, also showed some great poise during crunch time of this game. He worked on his outside shot during the summer and it showed tonight he finished with 12 points on 6-8 shooting and gave the Knicks great production off the bench.

Jose Calderon also woke up out of his slump. Coach Fisher wanted him to be more aggressive on the offensive end of the court, and tonight he seemed to be focused. He missed some shots early however he finished with 10 points and 3 assists. The Knicks shot 47% from the field as a team and 47% from behind the arc. Through the first 3 games of the season the Knicks are averaging 113 points.

The Wizards relied heavily on their young backcourt, John Wall and Bradley Beal. They both scored twenty plus points in the game; however, they did not shoot well from the floor. Beal went 9-23 and Wall went 8-17 from the field. Drew Gooden contributed with a double double for the Wizards scoring 11 points and grabbing 11 rebounds. Otto Porter Jr. added 16 points and 9 rebounds.

The Knicks improved to 2-1 on the season and have showed some promising signs that they will be an improved team after last season’s disappointing record. Next up, the Knicks face the San Antonio Spurs at home on Monday.