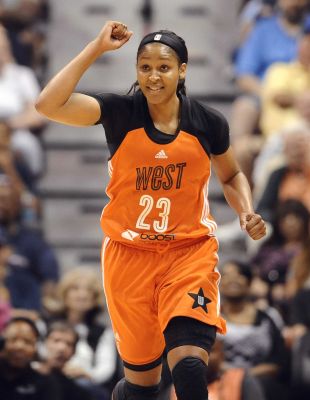 What more can I say about Maya? Two-time national champion at Connecticut, two-time WNBA Champion, three time gold medal winner and reigning WNBA MVP. Maya has built a rather impressive resume over her career.

She was a college superstar while playing at Connecticut and her success followed her to the WNBA as well. She is also an accomplished player overseas, where she plays during the WNBA offseason winning multiple championships there as well. Maya was the first female athlete to be signed to the Jordan Brand, which for basketball players’ male or female is an honor unlike any other. Wearing the brand of arguably the greatest basketball player in history is a privilege that few basketball players get. For Maya to be the first female to do so says volumes about her game.

In the most recent Jordan Brand commercial Maya can be seen dunking, on the WNBA court she slices up defenses with ease and shoots the jump shot with the accuracy of a seasoned sniper. She is a fierce competitor yet a soft-spoken young woman. In yesterday’s WNBA All-Star game she scored a record 30points, 8 consecutive points in the closing minutes of the game and won the All-Star game MVP. However we need “Moore” Maya.

The WNBA needs to take advantage of the play of Moore and some of their other star players to gain more viewers and create more revenue for the league. Moore’s name alone has so many marketing capabilities its comical, and its reasonable to think that more can be done by the league to market one of their premier players.

Some of the ladies in the WNBA earn in a year’s salary what some of their male counterparts of the NBA earn in one game. This is unacceptable but at the same time it is understandable, there just isn’t enough revenue to pay them the same type of salaries like the NBA. However the league’s MVP should not have to play overseas during the offseason just to supplement her income.

This year Maya is averaging 18ppg, 6 rebounds and 3 assists, those are remarkable numbers and it shows that she is impacting every aspect of the game for her team and showcasing the talent that female basketball players have. She is probably in the running for a second and consecutive league MVP award. There have been no off the court issues so she continues to be a role model for some of the young women who aspire to be professional basketball players and those that aspire to do other great things in life.