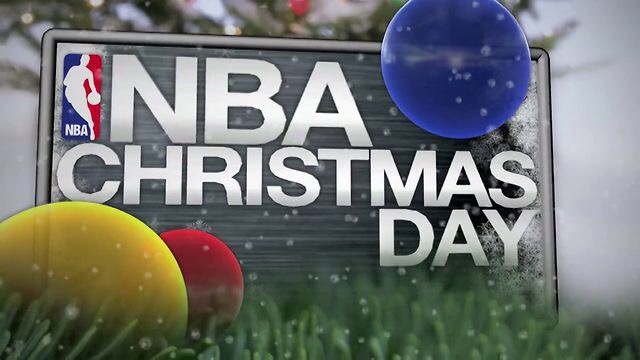 NBA Christmas round –up

As it is tradition, the NBA provided their fans with a Christmas day full of games showcasing some of the better teams in the league. Yesterday fans got their money’s worth as all five games that were nationally broadcasted had an almost playoff atmosphere or feel to them. Kevin Durant, LeBron James, Stephen Curry and James Harden led their teams to battle while entertaining fans across the globe.

The first game featured one of the league’s brightest young stars in Anthony Davis of the Pelicans. In what turned out to be a defensive battle, he showed just how much potential he has at still a very young age. Davis led the Pelicans with 29-points and 15 rebounds while Ryan Anderson added 18-points. Anderson caught fire from behind the arc late in the game but it wasn’t enough for the visiting Pelicans to defeat the Heat. Chris Bosh had a monster game tallying 30 points and 10 rebounds as he was matched up with Davis throughout the afternoon. It was a great battle between the two all-stars. Bosh returned this season after missing most of last season with a blood clot in his lungs so he relished the moment. Dwyane Wade added 19-points as the Heat had a balance attack against the Pelicans. Hassan Whiteside also added 8-points and 17 rebounds for the Miami Heat.

The second game of the afternoon featured a match-up between a high scoring offense and one of the better defenses in the league. For the first time all season the Thunder failed to lead in a game. This was a wire-to-wire victory for the Bulls who are coming off some controversy as their star player Jimmy Butler called out his teammates and coaches for a lack of effort. Butler had a very impressive performance and along with Pau Gasol and Derrick Rose led the Bulls to their second victory over the Thunder this season, becoming the only team and only East team to have accomplished this thus far. Rose started off slowly because of foul trouble but picked up his scoring in the second half. Gasol paced himself and had a few beautiful alley-oop passes to both Butler and Brooklyn native Taj Gibson. Gibson came off the bench to score 13-points and he was a presence in the middle all afternoon. Kevin Durant and Russell Westbrook led the Thunder in scoring and almost everything else. This duo as dynamic as they are can be a gift and a curse. They are just so talented that they often overshadow the rest of the team. Durant and Westbrook combined for 44 shot attempts yesterday with both taking 20 plus attempts. It seems like their offense is just the two superstars taking turns on the offense end of the floor. They were down by as many as 14-points and made several valiant efforts at making a comeback but the Bulls had an answer for every run. Durant finished with 29-points while Westbrook added 26-points.

This was the marquee match-up of the NBA schedule. A rematch of last season’s finals. Just like the finals this game did not disappoint it was close throughout with no team having more than a 10-point lead. There were some interesting plots in this game. The Warriors were 27-1 coming in and the Cavs finally got the chance to play the Warriors with both Kyrie Irving and Kevin Love in the line up. Irving in just his 4th game back struggled offensively and looked a little rusty as he is still working his way back from a knee injury that he suffered in the finals. He had 13-points on 4-15 shooting in 26 minutes of action as he is still on a minutes restriction. Love also struggled as he had 10points on 5-16 shooting. LeBron James had an interesting game, he had 25-points, 9 rebounds 2 assists and 2 blocks, however at times he seemed to hold the ball for too long in numerous possessions for the visiting Cavs. He also had several opportunities to attack the defense but chose to hold back. The game did have a slow pace, so it was understandable that he would try to slow down the tempo but still it seemed like he could have been a little more aggressive. The Warriors had a small scare near the end of the first quarter as Steph Curry went back to the locker room to tend to a sore right calf muscle that he injured against the Utah Jazz. He returned to the game in the second quarter. The Warriors had four players in double figures, Curry with 19, Thompson with 18, the always-animated Draymond Green led the team with 22-points but Shaun Livingston came off the bench and added 16-points as he took advantage of his size against the smaller Cleveland guards. This was a defensive battle throughout and the game was not decided until the final minutes of the game. This match-up lived up the hype and was a great game for the fans of the league.

The fourth game on the schedule featured the battle for Texas in a Texas size match-up between the Rockets and Spurs. The Spurs game into the game riding a seven game winning streak while the Rockets looked to play the role of streak breaker. Like all the other games on Christmas there was not much scoring and there was a defensive tone. A real playoff atmosphere was in this game. Possessions were valuable and both coaches were playing chess with line-ups and defensive schemes. James Harden finished the night with 20-points but did not get going until the second half. He really started cooking in the fourth quarter as he hit two big 3’s to help the Rockets get some distance from the Spurs. Kawhi Leonard who has shown great improvement on the offensive end had 20 points for the visiting Spurs; he guarded Harden for most of the game and as usual had a huge impact on the production of the other team’s best player. Tim Duncan and new comer LaMarcus Aldridge both finished with double figures in scoring as the front court for the Spurs accounted for 51 of the team’s 84 points. Tony Parker had a disaster of an evening as he scored just 2 points and seemed to be out of sync throughout the game. Dwight Howard added 11-points for the Rockets. Both teams struggled with turnovers the Spurs had 15 and the Rockets had 17 turnovers. The Rockets won this game from behind the arc as they went 7-15 while the Spurs went 5-19.

In the final game of the night the battle for LA went to the Clippers as it has for the past few seasons. Kobe Bryant played what seemed to be his last game on Christmas as he continues to play in his last season. The young Lakers struggled against the Clippers. The masterful Chris Paul finished with 23-points, 6 assists and 3 steals as he led to Clippers to victory in the last game of the NBA’s Christmas schedule. Blake Griffin finished with 13-points and 12 rebounds. The story of this game was the inability of the Clippers to finish the game. They were up by 20 heading into the 4th but after they took the starters out the Lakers mounted a furious comeback, forcing Doc Rivers to re-insert his starters to hold onto the win. The Clippers scored just 9-points in the final period. Kobe scored 12-points for the Lakers and was their second leading scorer as they struggled to score throughout the game. Rookie D’Angelo Russell scored 16 points as he took on the challenge of guarding Chris Paul and didn’t back down which is a good sign for the Lakers moving forward. The Clippers starting five scored 65 of the 94 points as their bench continues to struggle mightily. Their off-season additions have not panned out thus far. Lance Stephenson scored 3 points, Josh Smith did not play due to a coaching decision and Paul Pierce added 2-points on 1-6 shooting.