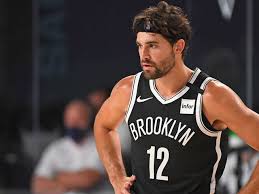 BROOKLYN (Nov. 23, 2020) – The Brooklyn Nets have re-signed guard/forward Joe Harris to a multi-year contract. Per team policy, terms of the deal were not released.

“From the moment he arrived in Brooklyn, Joe has epitomized what it means to be a Net,” said General Manager Sean Marks. “On the court, Joe has improved every season, and he’s worked diligently over the past four years to become a core member of our team. He is an excellent teammate, and his approach to the game, along with his character, have had a positive impact on all facets of the organization. Off the court, Joe is an outstanding person, and he and his family have become integral parts of our Nets family. While we celebrate all that Joe has accomplished in his career up until this point, we’re also eagerly looking ahead to the next chapter of his career in Brooklyn.”

During his time in Brooklyn, Harris has established himself as one of the preeminent marksmen in the NBA. Harris has shot 43.9 percent from distance over the last three seasons (2017-20), which represents the best 3-point percentage in the league in that time (minimum 1,000 3-point attempts), and his career 42.6 3-point field goal percentage is the fifth-highest among active players and the 12th-highest in league history. He has also made two appearances in the 3-Point Contest at NBA All-Star Weekend (2019 and 2020) and became the first Net to ever win the contest in 2019. He is the only player in franchise history to make multiple appearances in the 3-Point Contest.

Harris ranks fourth in Nets history in 3-pointers made with 590 and occupies the third (183 3-pointers made in 2018-19), fourth (172 in 2019-20) and 10th (150 in 2017-18) positions on the franchise’s all-time single-season 3-pointers made list. The 29-year-old guard/forward has shot 43.0 percent from 3-point range as a Net, good for the second-highest 3-point field goal percentage in franchise history, trailing only Drazen Petrovic (43.7 percent). Harris became the first Net to ever lead the league in 3-point percentage in 2018-19, breaking the franchise record for single-season 3-point percentage in the process (47.4 percent). He also finished seventh in the category in 2019-20, joining Petrovic as the only players in Nets history to finish in the league’s top 10 in 3-point percentage in multiple seasons (Petrovic finished second in 1991-92 and third in 1992-93).

The Chelan, Wash., native and University of Virginia alum originally signed as a free agent with the Nets on July 19, 2016, and then re-signed with Brooklyn on a multi-year contract on July 24, 2018. Harris joins Caris LeVert as the longest-tenured Nets.