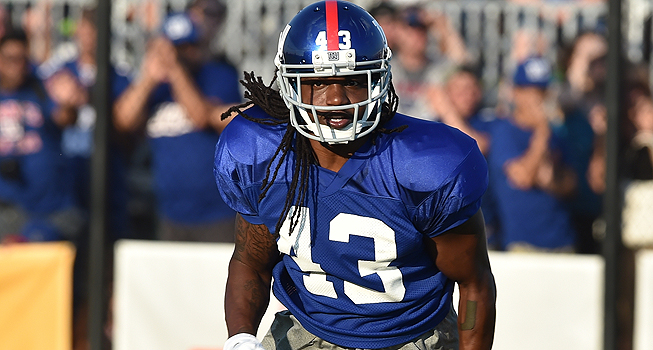 This weeks Giant’s signing of safety Brandon Meriweather reminded us of two things. One, that the Giants really need help in the secondary. At one point during today’s media hour, Tom Coughlin was asked how the veteran safety would fit in with the defense. His answer “He’s a safety…when that whistle blows I’m supposed to have 11 guys out there!” said Coughlin.

Although he said it jokingly it’s true the team is really lacking depth at that position and just need a guy to fill the vacancy. However, this brings me to the next thing that this signing has reminded us of. THE GROWING SOFTNESS IN THE LEAGUE.

I don’t know about everyone else, but the league is getting closer and closer to a flag football league as each game goes by! The fact that we have gotten to a point where we now are questioning a signing due to the over-agressive play of a safety is just sad and today I was not alone.

Jon Beason spoke on the signing of his former college teammate on Monday and he also had some interesting opinions on the new age of the league.

Beason, who considers himself a hitter, stated how much players like himself where sought after in early rounds of the draft years ago, even mentioning how Meriweather was the pick right before him back in the ’07 draft. Back then when football was true football that’s exactly what teams considered first round pick worthy.Now the transition players have to make now entering the pros due to the legal hit areas and targets, teams have to worry about the player getting fined and penalized on every tackle. He even mentioned how much just in the years he’s been in the league has changed on target areas.

I get it. I’m all for player safety, but when it starts to favor one side of the ball (the offense), you start to take away from the game. No wonder quarterbacks these days are consistently throwing for over 4,000 yards a season… that isn’t impressive anymore! Not when it’s gotten to the point where the defense is taking extra time in their heads on how to approach hitting the man with the ball perfectly.

Beason also weighed in on this matter by stating that in his opinion, the blame should be placed on the QB, by saying that in the old days when a team was playing cover 4 with a safety over the top, you just knew that you don’t throw that ball or your receiver is going to die. He said instead in today’s game they throw it knowing it will be a penalty on the defense.

I don’t disagree, it’s not just on ball over the middle anymore either. In every game now you see quarterbacks just heaving the ball 50 plus yards downfield, just because they know they have a great shot at a pass interference on the defense, because why not.

The signing of Brandon Meriweather should remind everyone that was a true fan of old school “good old days” football that we are now living in a world designed to boost ratings for the casual fan and fantasy football. It’s the new NFL and you either play by their rules or you’re out. Keep in mind if you switch the letters around NFL, NO LONGER FOOTBALL. We’re closer than you think.