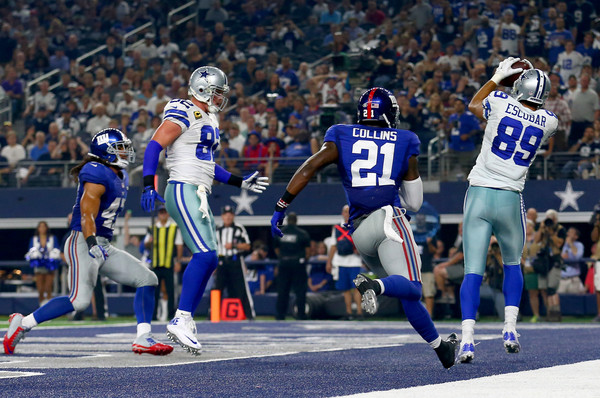 The New York Giants were less than a minute and a half away from pulling off one of their biggest upsets in team history late Sunday night, that was until it went down as one of their most tragic losses.

The Giants entered their game against the Dallas Cowboys in Dallas as a big underdog, but they shocked many Sunday night when they beat the Cowboys for 59 mins and 47 secs. Unfortunately for Giants fans a game is 60 mins. New York was up 26-20 late in the fourth until a Tony Romo pass to Jason Witten for a touchdown gave Dallas the W.

However Giants fans had plenty to be happy about even while heartbroken over a loss that never should have happened. So in this case I am going to do something different, I am going to analyze what I saw before the last 13 secs of a prolonged version of a horror story for the books.

The Win That Never Happened

First off in a game that they didn’t have LB Jon Beason on Defense and Cruz on offense, the Gmen held more than their own.

Dominique Rodgers-Cromartie and Truman McBride both played outstanding and should have shared player of the game in this one because the Cowboys, as far a I’m concerned never should have been in this one at the end.

With New York trailing , 6-3, with 56 seconds left in the second quarter, Cole Beasley caught a Romo pass over the middle and tried to make a cut back towards midfield instead of heading for the sidelines, but it turned out to be a bad decision. Beasley was finally caught and stumbled forward, corner Trumaine McBride punched the ball loose. Right there was CB Dominique Rodgers-Cromartie who scooped it up and took it 57 yards to the house, giving the Giants a 10-6 lead and stunning the onlooking crowd.

On the following Dallas possesion T.Romo was picked off by U. Unga, the man filling in for Jon Beason, on a ball intended for Witten. The Giants took over at the Cowboys 21 setting them up a 40-yd Brown field goal and giving them the 13-6 lead going into the half.

The Pass Interference That “Should” Have Never Happened

With The Giants in clear control of the game and Dallas flustered down now 16-6 Tony Romo took a shot downfield in the 3rd quarter to Terrence Williams in the end zone. Dominique Rodger-Cromartie seemed to make a great play on the ball to prevent the touchdown, but the referee called pass interference on the defense and Dallas finished off the drive with a touchdown pass to Escobar to put Dallas back in the game.

If you have followed my articles then you already know my stance on defense in the NFL. This is just another example of how the game has changed, IMO, for the worst. This was a play in which Rodgers-Cromartie clearly had a light hand on the back of the receiver (legally) and without grabbing on made a tremendous play to defend the ball away, but yet it ultimately results in a touchdown.

This, to me, was the clear “game-changer”.

In the fourth quarter with Cowboys hopes dwindling, Romo fired a pass to a cutting Devin Street, who couldn’t hold on when he was hit by Brandon Meriweather. The Giants offseason acquisition known for laying the boom did it again in just his first game in Big Blue. He hit Street right on the ball and McBride picked off that pass and raced to the Cowboy 1, setting up Rashad Jennings’ one-yard touchdown dive for a 23-13 edge.

Now 23-20  late int the 4th quarter the Giants were headed in for another score for a chance to cap it. Even here you got the sense something was going New York’s way again when Eli Manning finally connected to Odell Beckham Jr for a huge 16 yard pass on 3rd and 14 from the Dallas 20. But then with 3rd and 1 on the goal-line with 1:43 on the clock, Tom Coughlin brought back memories of the Super Bowl when he decided to pass instead of run. The play ended with an incompletion after Eli rolled out right and was forced to throw it out of the end zone. This proved to be costly as the time stopped and gave Romo and his team a possible 30 or so seconds more than they would have if they ran than passing. The Cowboys scored with 7 secs left and Coughlin after the game took full blame.

Although they may not have scored the touchdown, the time, not the extra points is what buried this Giants’ team in Week 1, but going with the theme here about the Giants winning in everything but the final tally, I’ll add in that Cowboys WR Dez Bryant is reportedly out 4-6 weeks with a broken foot.