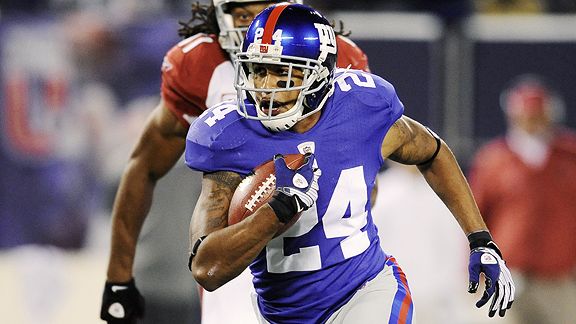 Known in the locker room as TT24, Terrell Thomas will be attempting his second straight comeback this year, after tearing the ACL in his right knee in consecutive seasons. Thomas will take a slower approach this time around, as he feels he might have rushed himself last year in order to be ready for training camp. He was quoted in the New York Post as saying, “I’ve controlled myself a little bit more. Last year, I was killing myself. It worked out, when I went back I was in great shape, when I came back I was in great shape. This year, it’s just being a little more cautious.” Thomas also tore his ACL in college while playing for USC.

The odds are stacked against Thomas, but everyone around the Giants organization is rooting for him. Thomas, once regarded as one of the most promising young corners in the league now faces his toughest challenge yet. From 2009-2010, Thomas recorded 186 tackles, 10 interceptions, 5 forced fumbles and 2 sacks. For the longevity of his career, both he and the Giants are aware that a position switch to safety may be in his best interest. Playing cornerback takes more of a tole on the knees than playing safety, as Thomas was quoted in NBC’s profootballtalk.com saying, “Your knee is in a more unstable situation [at cornerback], you have to react to the receiver. Safety is more you’re dictating. So I think that’s why Jerry Reese said that. But I already knew I’d switch to safety later in my career just because of my body type, the way I play. So I’m not scared at all.”

A healthy Thomas will add another dimension to the Giants secondary that is desperately needed. Corey Webster had an off-year last season, Prince Amukamara has not lived up to his 1st round selection, although he did make improvements last season, Jayron Hosley is still young and inexperienced and free agent Aaron Ross had some less than stellar seasons with the Giants before departing for the Jacksonville Jaguars last year. Antrel Rolle has been asked to play nicklecorner in Thomas’ absence the past couple of seasons, but his true play making skills comes when he is in the safety position. If Thomas is healthy enough for a return, he will still have to compete with Will Hill, Tyler Sash and Stevie Brown, all promising young players, just to make the roster.

The Giants selected Thomas out of USC in the second round (63rd overall) of the 2008 draft, and then re-signed him to a 4-year $28 million contract in March of 2012. The Giants put off-set language in the contract to protect themselves in case of another injury like the one Thomas suffered last off-season. Look for Thomas to start the season on the PUP list, and hopefully a cautious attempt back from surgery this time around, along with a position change to relieve the stress on his knees will see Thomas have a bounce back year. After all, he might be playing for his NFL career.