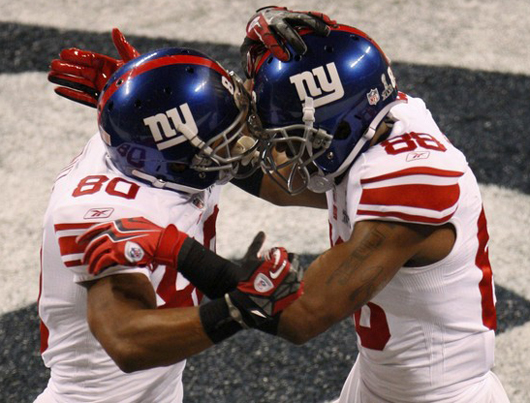 The Giants and GM Jerry Reese, are in a precarious situation, as they need to find a solution to keep both Hakeem Nicks and Victor Cruz, their top two receiving targets happy. As we all know, the NFL is a business, and agents as well as front offices play dirty in order to get the best deal possible for them; commonly known as negotiations.  The Giants need to determine how much money to allocate to Cruz while keeping Nicks in mind. Cruz is a restricted free agent, and did not receive an offer sheet from a different team this off-season. Nicks, who the team views are their true number one receiver is in the final year of his rookie deal.

According to NFL.com’s Ian Rapoport, Nicks  is more than willing to play out his rookie contract, taking the opposite approach to Victor Cruz. On Monday, Rapoport reported on NFL Network’s “NFL Total Access” that Nicks will take the wait and see approach with Giants, and essentially wants to play out his contract, according to a person informed of his thinking. Nicks will allow the Giants to come to him with a proposal, willing to bet on his performance rather than settle for less.

The Giants view Nicks as the more valuable wide-out, as he draws more attention from defenses than Cruz. There is no doubt that the Giants number one plan is to keep both receivers, and they still remain confident that a deal with both will get done. We will probably see the Giants work out a deal with Cruz first, as he can become an unrestricted free agent after this season, and the Giants would be able to place the franchise tag on Nicks next off-season should the situation extend that far. The Giants would like to see Nicks stay healthy, as he did in the first half of his rookie contract. No doubt, this is a big investment, and the Giants want to make sure they are confident in their decision before dishing out millions; similar to a deal that Mike Wallace received in Miami (5 years, $60 million). Should Nicks have another disappointing, injury rattled campaign after last season, his negotiation leverage will certainly diminish, and should he turn in a 2010 campaign, his leverage will rise. Regardless, the Giants will have the upper hand, as I previously mentioned the ability to slap the franchise tag on him, and allow them to continue to work out a long term deal.

Albeit, Cruz made an underwhelming $540,000 in base salary in 2012 while Nicks made $1,780,000, it might take both players to compromise in order to keep them in a Giants jersey. Remember, the Giants will also need to save money for Jason Pierre-Paul, as his rookie contract is set to expire 1 year after Nicks.