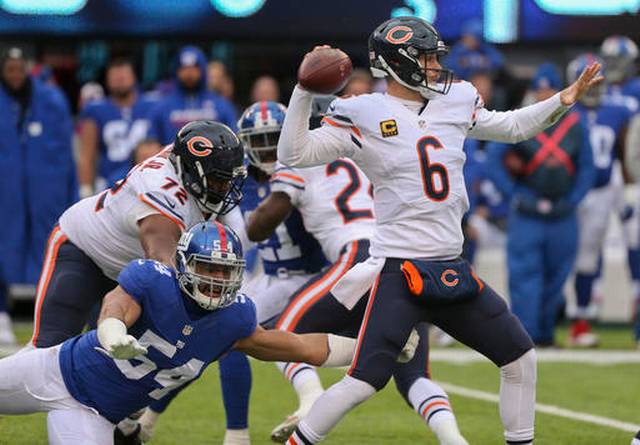 The Giants came into the chilly and windy afternoon at Metlife stadium seeking their fifth straight win against the Bears.  The Bears began their first drive aided by an early personal foul call on Olivier Vernon and proceeded to move the ball downfield with little difficulty.   The series was highlighted by a pair of receptions to Jeremy Langford and a 19 yard touchdown pass to tight end Zach Miller.   The Giants offense trotted onto the field looking to even the score.  Manning and the offense showed off a balanced attack, running the ball five times and passing five times.  The drive was marked by coach Ben McAdoo’s decision to go on 4th down and 2 from the Bears 17 yard line.  The aggressive move paid off when Sterling Shepard caught a pass and took it to the two yard line.  On the following play Rashad Jennings ran it up the gut two yards for the touchdown.  Robbie Gould then missed the extra point as the Bears kicker did on their touchdown drive, knotting the game at six.  The Giants defense allowed the Bears to move the ball on their next possession but stopped them on a big 3rd down and 8 from their twenty four yard line, forcing them to settle for kicking a 40 yard field goal.  The Giants defense struggled again on the Bears third possession.  Their offense methodically moved the ball downfield, with a running attack dominated by Jordan Howard and a sprinkling of Jeremy Langford for good measure.    Langford capped the 79 yard drive with a 1 yard touchdown run and extended the Bears lead to 16-6.  The Giants defense had fits stopping the run in the first half as the Bears’ running backs seemed to move downfield at will.  On the Giants final drive of the first half, McAdoo showed yet again how aggressive he is, going again on fourth down.   The Giants converted for a second time as Manning’s pass to Jennings in the flat was good for a five yard gain.  After a succession of incomplete passes the Giants kicked a 46 yard field goal making it 16-9 Bears with just over three and a half minutes remaining in the first half.  The Giants would head to the locker room with the score remaining 16-9 Bears and hoping for a completely different effort from their defense in the second half.

The Giants came out quickly in the third quarter as Dwayne Harris returned the kickoff 46 yards giving the offense excellent field position to start their drive.  The Giants proceeded to go fifty six yards on 9 plays in just under 4 minutes, culminating in a nine yard touchdown pass to Will Tye.  The touchdown tied the game and gave the Giants a boost.  On the Bears first possession of the second half the Giants defense stepped up and forced a quick three and out, returning the ball to Manning’s hands.  The offense now in a groove, marched downfield, highlighted by a 48 yard pass play to Victor Cruz.  Then just three plays later on third down and four Manning found a wide open Sterling Shepard in the end zone for a 15 yard touchdown, giving the Giants their first lead of the day.  Following the score, Robbie Gould missed his second extra point of the day making it 22-16.  As the fourth quarter began the Bears faced a 2nd and 17 at the Giants 42 yard line.  The Giants defense, which played at a much higher level in the second half, showed up again when Jason Pierre Paul sacked Cutler forcing a third and nineteen.   Soon after, the Bears attempted a 51 yard field goal which missed, and kept the Giants six point lead intact.  After the Giants defense forced a three and out, pinning the Bears inside their own end zone the Bears were forced to punt.  The punt was muffed by Dwayne Harris but recovered by Eli Apple.  The Giants were not able to do anything with the possession as the offense’s struggles to move the ball after their first two drives of the second half continued.   The defense that they’ve relied upon all season long continued to show up big and keep the Bears at bay.  With just under six minutes remaining Leonard Floyd was injured and had to be carted off the field.  The Giants would punt soon after and the Bears would have another chance to take the lead as their drive began from their own 30 yard line with just under five minutes remaining in the game.  The Giants defense came up big again, holding Cutler and the Bears offense to just three yards and forced a punt.  The ineptitude of the Giants offense continued in the fourth quarter, and on their next possession they quickly turned the ball over on downs and gave the Bears one last chance for a winning drive.   The Bears decided to make things interesting on their final drive of the game when on first down Cutler threw a deep pass to Marquess Wilson for a 35 yard gain that immediately put them in Giants territory.  Three plays later Cutler found wide receiver Joshua Bellamy in the middle of the field for a 23 yard reception that put them on the Giants thirty yard line.  Thankfully for the Giants with just under a minute and a half to go in the game and a 2nd and 29 from the Giants 49 yard line Cutler’s pass was intercepted by safety Landon Collins.   It was his fifth interception in the last four games and effectively ended the game.  Despite the Giants’ offensive struggles, their defense saved them yet again with an outstanding effort in the second half.

The victory was important because the division leading Dallas Cowboys won their ninth straight game on Sunday afternoon.  The Giants remain two games behind the Cowboys with just games six to go in the season.  Next week the Giants head to Cleveland to take on the winless Browns and will need another win to keep pace in the NFC East.