The rest of the season outlook for the GMEN 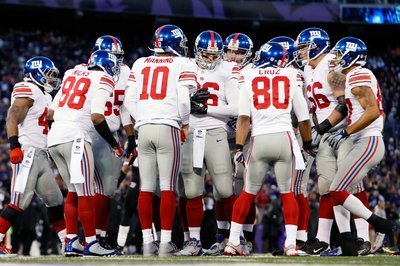 No team has ever made it to the NFL Playoffs after starting 0-6. The New York Giants now stand at 1-6 after defeating the Minnesota Vikings on Monday Night Football in Week 7. With one game before the halfway point of the season, the Giants playoff hopes are slim to none. The only real possibility that they are still in contention, if you would like to call it that, is the fact that the play in the NFC East. The standings headed into Week 8 are as follows;

With 9 games left in the 2013 season, the reality is that even if the Giants get really hot down the stretch, as they have shown they can do in previous seasons, it still might be too little too late. The Cowboys are known for choking near the end of the season, but every year is a new year so you cannot count on seasons past. With RGIII looking close to gaining that dynamic play-making ability again after tearing his ACL in last year’s Wild Card game, the Redskins must be seen as a serious threat to challenge for the division as well.  Even the Eagles must be considered a contender to be crowned the NFC East champion although they cannot find a starting quarterback for more then 2 weeks at a time.

The Giants are a very proud organization, with proud players in that football locker room. Some of them are 2-time Super Bowl Champions, and some of them are 1-time Super Bowl Champions. They also have a coach in Tom Coughlin who will not let his team roll over and die on him. While their chances of making the playoffs are very slim, if the Giants are able to make a late push like they have in the past, the NFC East might come down to Week 17 for the 3rd straight year. Only time will tell, but for the Giants they can ill-afford to go anything less than 8-1 to be in the mix come seasons end.