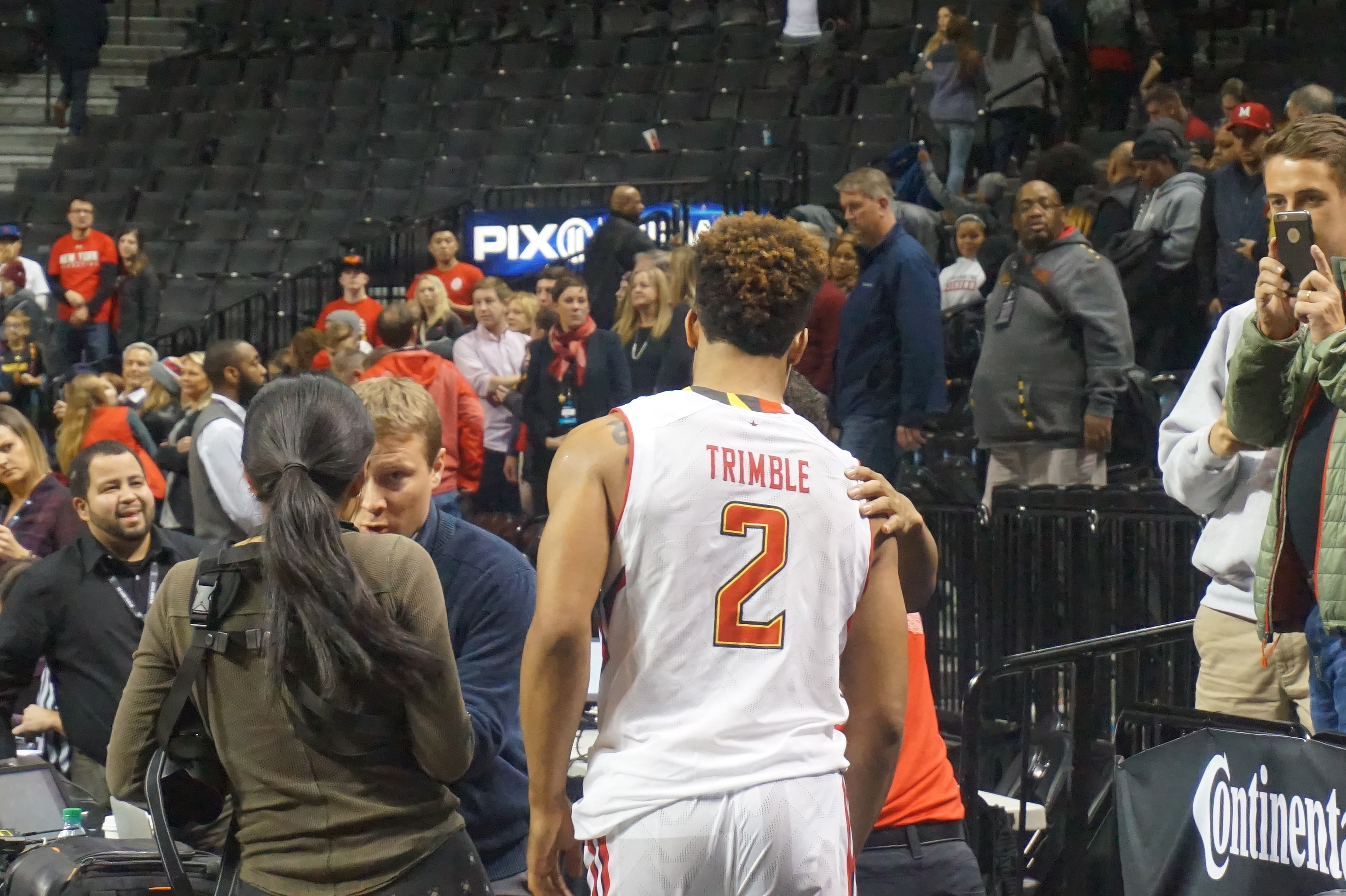 The Richmond Spiders and the Maryland Terrapins took the floor for an exciting matchup last night at the Barclays Center in the Brooklyn Hoops tournament. Richmond was 3-1 and Maryland was undefeated at 5-0 going into the game.

Both teams started with high energy. For Richmond Khwan Fore and ShawnDre’ Jones were hot early. The Spiders took a 10-point lead with 10:29 left in the first half. Khwan Fore had 8 quick points and Jones had 13 in the first half. Maryland could not buy a basket early on as they struggled offensively.

Richmond jumped out to a 24-10 lead with 7:36 to go in the first half. It was clearly a pro Maryland crowd at the Barclays center and they tried to bring their team to life early in the first half but the Spiders were patient on offense and were executing in their offensive sets.

Maryland’s star player Melo Trimble could not find an offensive rhythm early in the first half. He had a tough drive to the basket with 4:34 left in the half; he scored the basket and hit the free throw to get the Terps to within 12. However Richmond responded and took a 38-26 lead into the half.

The Maryland crowd woke up in the second half as the team came out o with a lot more energy and poise. They got to within 8 with 17:20 to go. However Richmond would not let up, they responded after every Maryland run. The Terps kept chipping away at the lead. A big 3 by Kevin Huerter led to a Spiders timeout after he pulled the Terps to within 6 at 43-37. After another Huerter 3 point shot the Spiders lead dwindled to just 3. The comeback was on.

Richmond became very sloppy with the basketball and Maryland capitalized. Trimble cut the deficit to one after a nice give and go with Bender. The Spiders responded again however Trimble hit a 3 with 12:00 to go to tie the game at 47.

Richmond’s Marshall Wood then answered with a 3 of his own. The action was fast paced, back and forth, both teams were finding an offensive rhythm and hitting outside shots. Maryland finally took the lead after a great driving reverse layup by Anthony Cowan. The Maryland fans roared as their team finally were playing inspired basketball. The game was tied again at 58-58 after a layup by ShwanDre’ Jones for the Spiders.

With the game tied at 70 the referees had a tough play to call as players from both teams (TJ Cline and Michal Cekovsky) tried to go for a ball that was going out of bounds. The call was initially in the Spiders favor but after review the Terps were rewarded with the ball. With 12 seconds to go they tried to inbound the ball to Melo Trimble however the pass was stolen by Khwan Fore. The Spiders chose not to call timeout and raced down the court to try to end the game in regulation however they could not get a good look at the basket as time expired. The fans at Barclays Center were rewarded with five more minutes of basketball.

The game was close in the overtime period but Maryland played with poise. Trimble took the team on his back and led them to victory as he hit big shot after big shot to keep the Spiders at bay. He finished with 31-points to lead all scorers. The Terps had four players in double figures, Anthony Cowan added 18-points and 5 rebounds while Justin Jackson finished with 16-points and 7 off the glass.

The Spiders’ big lead disappeared because of turnovers and their inability to come up with big rebounds. The Spiders were led by ShawnDre’ Jones who had 23 points and 4 assists. T.J Cline contributed 18-points, 9 assists and 9 rebounds as he had a very productive game. They fall to 3-2 and will face Boston College in the consolation game at Barclays Center.

With the win the Terps improve to 6-0 and will face the Kansas State Wildcats in the Brooklyn Classic Hoops championship game.