Uh Oh and 3 for the Giants 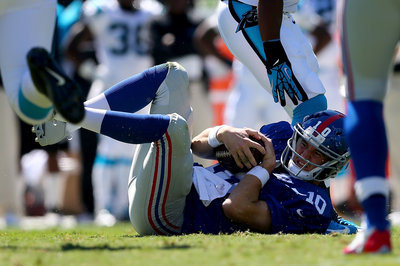 The New York Giants fell to 0-3 with an dreadful (to put it nicely) 38-0 loss to the Carolina Panthers. Forget the Giants being shut out to a team that was 0-2, this was the ugliest loss in the Tom Coughlin era. This year, the Giants will know who their true fans are, as there does not seem like there is hope in sight.

The Giants gave up an embarrassing 4 sacks in the first quarter and 6 in the first 17 minutes of the game. They finished with allowing 7 sacks and left tackle Will Beatty may have played his worse professional football game to date. Eli has never missed a game in his career since being anointed the starting quarterback, but it will be tough to keep that up with many more beatings like yesterday.

After the loss of Tom Coughlin’s younger brother earlier in the week, the Giants just showed no passion. In all truthfulness, this game was borderline un-watchable. The Giants now sit at the bottom of the NFC East at 0-3 (along with the Washington Redskins), and will be chasing the 2-1 Dallas Cowboys for the rest of the season.

There is no doubt that the NFC East is very weak this year, but with the way the Giants have been playing it is unrealistic to think they have a chance. In their 3 games so far, the Giants offensive and defensive lines like rag dolls. David Wilson had 11 carries for 39 yards (yikes!), and has a grand total of 75 rushing yards 3 games into 2013. Hakeem Nicks well held catch less in his homecoming to North Carolina, where he grew up and played his college ball.

It looks as if the Giants have way to many holes to fill if they want to get back into playoff contention. Yes, we know when the Giants’ backs are against the wall they play their best football, but they may not have enough talent (outside of the skill positions) to make it work this year. Heading into week 4, it looks as if the NFC East is the Cowboys’ to lose.

There is not much to say about this loss, only it looks like the Giants are in for a rough 3 months. Unless they can turn this around fast, you might hear the whispers that Tom Coughlin has lost his locker room (again), and the talks about ‘tank for Clowney’ may be rolling in.