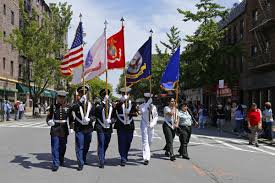 NEW YORK, NY — More than 25,000 people — many of them veteran’s and active-duty military members — will march up Fifth Avenue to pay gratitude to those who have served and are serving in the United States military for New York City’s annual Veteran’s Day Parade.

This year’s parade marks the 100th anniversary of the end of World War I, and the Unites States Army is the featured military branch, according to the parade’s sponsor, the United Veterans War Council.

Medal of Honor Recipient Florent Glogerg will serve as the grand marshal for this year’s parade. Groberg, a retired Army captain, served in the War in Afghanistan. Army veterans Mike Evans and Jason McCharty will serve as honorary marshals, according to the United Veterans War Council.