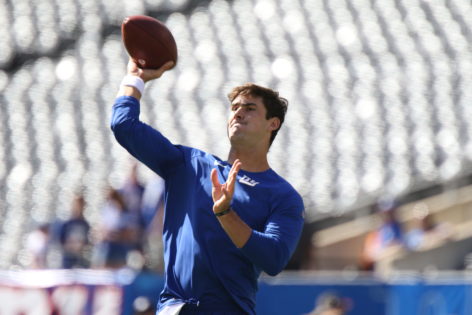 EAST RUTHERFORD, N.J. – Sunday afternoon, the New York Giants entered a divisional match-up against the Washington Redskins. Big Blue came into the contest riding the high of a comeback win against the Tampa Bay Buccaneers.

The Giants did a great job of taking advantage of a sputtering Washington offense early. New York got pressure on Case Keenum, and stayed solid with their gap assignments.

Many people were interested to see what Wayne Gallman Jr. would be able to do in the absence of Saquon Barkley. Gallman Jr. ran hard, and showed patience in hitting the right holes. This resulted in 2 first half TDs for Gallman Jr., as the Giants jumped out to an early 14-0 lead.

This prompted the Redskins to replace Keenum with Dwayne Haskins Jr. Many believed the Giants should have selected Haskins Jr. over Jones. This was a first look of what this divisional rivalry would look like for years to come.

Many expected Daniel Jones to repeat his dominant performance from a week prior. Jones impressed many with his quick decision making, and dexterity with his feet.

However, Jones struggled early in this game throwing the football. Jones threw two interceptions, but showed fortitude by bouncing back and leading a scoring drive to close the half. New York went into halftime, holding a 17-3 cushion over the Redskins.

The second half was more about the defenses of both teams. The Redskins forced a red zone turnover, as they were able to get Jon Hilliman to fumble.

But on the following drive, the Giants flexed their defensive muscles.
Haskins Jr. got caught throwing off his back foot, with pressure in his face. Jabril Peppers intercepted the pass and took it to the house, to extend the New York lead to 24-3.

Haskins Jr. didn’t really give the Redskins a chance to come back in this game. The Redskins rookie was intercepted three times in total, and really struggled getting the ball out on time. Haskins Jr. took two really bad sacks, as this game was a valuable learning experience.

The Giants defense was largely to blame for Haskins Jr.’s struggles. The secondary didn’t allow the Redskins receivers to get any separation downfield. This is something New York will need to translate on a weekly basis.

New York used a strong defensive performance to secure a 24-3 win over the Redskins. This put the Giants at a 2-2 record on the season, and 2-0 since Jones was named the starter. This was only the 5th home win for New York since 2016.

You have to wonder just how long the Giants can keep this streak of winning football up. If New York can, this could be the makings of a wild card playoff team.