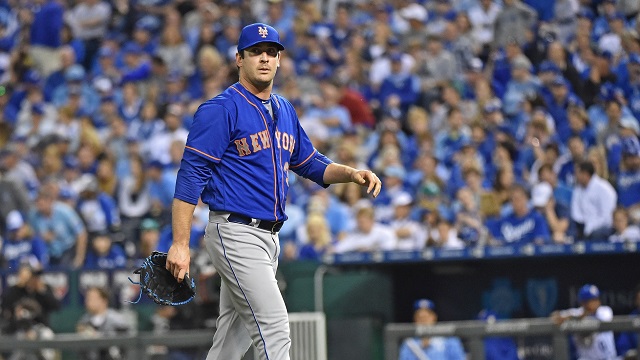 KANSAS CITY, MO – The New York Mets were coming into their opening game, eager to start the season. New York had an amazing run to the postseason last year, and even made it into the World Series. However, the Kansas City Royals stood between them and their first World Series title since 1986. The Royals would go on to beat the Mets in five games, and sent New York into the off-season hungrier than ever.

This season in a rather poetic way, had the Mets playing their first game against the defending champion Royals. 2016 would be a new season, and New York sent their ace Matt Harvey to get retribution. Harvey has been dubbed “The Dark Knight”, and the entire clubhouse had all the confidence in him making the first start of the season.

“There are just guys that rise to the occasion. There’s guys when they’re faced in a tough spot, they pick it up, they pick up their game,” Mets skipper Terry Collins said. “And he’s one of those guys.”

Harvey however, did not live up to his expectations Sunday night. The “Dark Knight” only lasted 5.2 innings in Kansas City, and was knocked around for three earned runs on eight hits. Harvey only recorded two strikeouts, as his “swing and miss” stuff was not there Sunday night. The velocity wasn’t all the way dialed up like we are used to seeing, but this is expected as it is only the first start of the season.

Harvey did not get much help from his offense or defense. Yoenis Cespedes had a devesating error on a fly ball that should have been caught, which eventually led to a run scored. The Mets up until the eighth inning could not string together hits, or get hits to begin with. New York was 1-10 with runners in scoring position, which ultimately led to their 4-3 loss to the Royals.

The encouraging thing was that Harvey did get ahead of most of his batters Sunday night. Harvey threw a first pitch strike to 16 out of 25 of the batters he faced. Also, Harvey threw 51 of his 83 pitches for strikes, and only walked two batters. So as we can see, command was not an issue Sunday night.

All in all, this was a disappointing start for Harvey. Harvey starts the year with an 0-1 record, but there is no cause for panic in Gotham.

Can this be Mike Piazza Year for the Hall