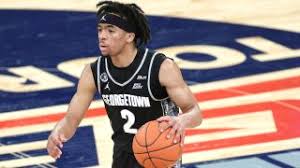 Georgetown started out slow looking as if they were exhausted from yesterday win over Seton Hall. The team finally got things going with twelve minutes left in the first, ending the half on an eighteen to nothing run giving the team 38 to 18 halftime lead.

This gives the team it’s first BigEast championship under Patrick Ewing. The last time the team won the BigEast was in 2007, under John Thompson III. GeorgeTown 12-12 on the season was the 8th seed in this years tournament. No one expected this team to win the BigEast.. Hoyas win baby 73 to 48 ..

from the shot to the celly, it's all in the form. 👌

Frank Clark: "As an older guy, a year eight guy, I'm proud of these young guys, how they’ve stepped into the light."

Tune in to see the official weigh-in for #RochaAshie by clicking the link below! Stream starts at 12:30pm PT

Thank you NYC! The city will always hold a special place in my heart. NY forever blue 💙

Frank Clark on Joe Burrow: "I feel like he's the best in the game. No matter how many times he gets hit, he gets up and makes plays. He knows how to read safeties."

“I know a lot of eyes will be on me coming off my last fight, but I love the pressure. It makes me a better." - @JamalShango