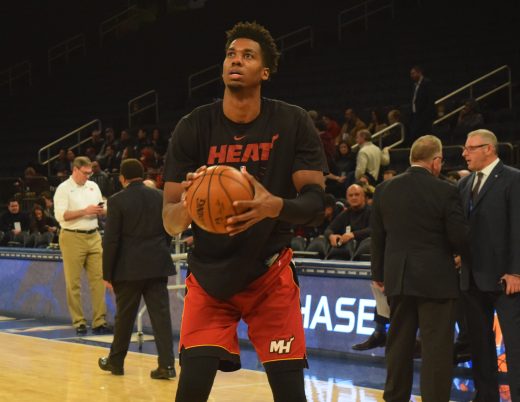 NEW YORK CITY, N.Y. – The New York Knicks came into Sunday night, looking to end an eight game losing streak. It has been a rough stretch for New York, as they have not shown the progress that many are looking to see. In fact, some could argue that the Knicks have digressed during this losing skid. The chemistry just is not there, and Coach David Fizdale has struggled to find a unit to produce consistently. Sunday night, the Miami Heat came into Madison Square Garden looking to win their second straight game. Even though Miami still is contending for a playoff spot, this was a winnable game for the Knicks to rebound back.

For much of this game the Knicks played solid basketball, and even stormed back from a second half deficit to tie the game in the fourth quarter. However, Miami put its foot back on the pedal and were able to pull away from New York late. New York would drop it’s ninth straight game in a row, in a 106-97 loss to Miami. The Knicks have now fallen to a dismal 10-38 record, with just a 4-17 record at the Garden. Protecting home court is crucial for NBA teams, especially considering how difficult it is to win on the road. The Knicks have done a poor job of defending the Garden this season. It even got as bad as hearing “Let’s Go Heat” chants from the majority of the Garden. To win the fans back, quite simply the Knicks need to start winning games.

In what seems to be a lost season, you have to try find positives to continue to try to progress as a team. Even though the Knicks were outlasted by the Heat, there were some good takeaways from the Knicks’ effort Sunday night. Here are a couple positive takeaways from New York’s loss to Miami: