Nicks and Cruz’s absence a blessing in disguise? 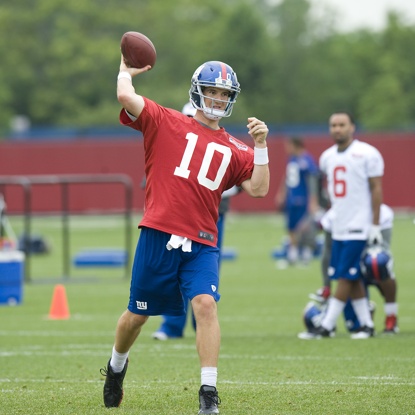 With Hakeem Nicks and Victor Cruz being no-shows for the Giants OTA’s, could this actually be a blessing in disguise for Eli Manning and the rest of their receiving core?

With Nicks and Cruz absent, this allows Manning to get valuable practice repetitions with receivers he otherwise would of had the chance to do. Manning can now take first team reps with 2012’s second round pick, Ruben Randle, and 2011’s third round pick, Jerrel Jernigan. He also will have the chance to work with Luis Murphy, who signed with the Giants in the off-season.

Hopefully, for all Giant fans, deals will get done with both Hakeem Nicks and Victor Cruz, as we all know when healthy just how much of a dynamic duo these two can be. Nonetheless, it will be very interesting to see how this situation plays out, and how GM Jerry Reese will handle this unexpected situation.