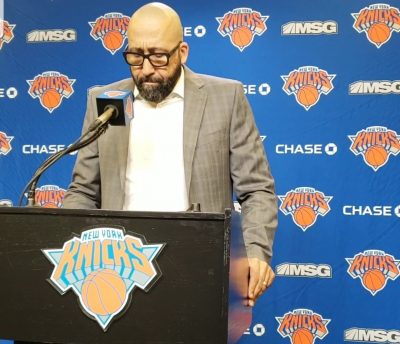 NEW YORK CITY, N.Y. – The New York Knicks (10-33) have struggled to find any success over these past few weeks, and we have started to see the effects of the continuous losing. The dejected faces weren’t as visible in the beginning of the year and the continuity from this team has been scarce.  New York has dropped 12 of their last 13 games, and currently hold a four game losing streak after losing 105-108 to the Philadelphia 76ers.

This has already been slated as a rebuilding year, however the lack of progress towards wins can cripple a team’s confidence. The talent may not be there for the Knicks to be contenders, however there are things this team can control effort wise that are holding them back from growing into a winning team. Here are a couple key takeaways from this dreadful stretch from New York: