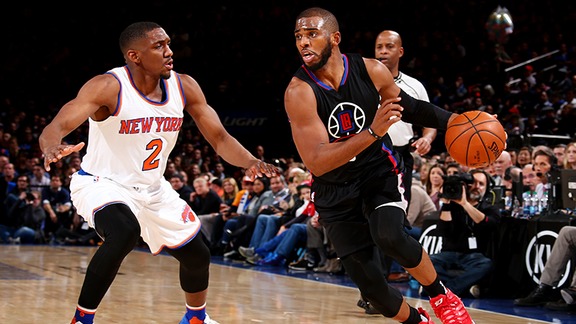 NEW YORK CITY, N.Y. – The New York Knicks (20-20) have been playing great basketball in Madison Square Garden this season until Friday night. New York has posted a 13-8 record at home, and have won their last six games in the Garden. During this six home game winning streak, the Knicks have averaged 112.7 points per game and just 12.3 turnovers per game.

The Los Angeles Clippers (27-15) came into a sellout crowd in the Garden Friday night, looking to pick up another blowout victory. In last year’s contest in the Garden, the Clippers won 111-80 and handed New York its 58th loss of the season. That Knick team played without Carmelo Anthony due to season ending knee surgery, and Kristaps Porzingis wasn’t even drafted yet.

This may be a new season, but the same problems can get you beat no matter what personnel you have on the floor. The Clippers dismantled the Knicks last year in the Garden by forcing 20 turnovers and scoring 24 points off of those turnovers. You have to protect the basketball in order to win. If you don’t, “Lob City” will put on a show in transition. Last year, Los Angeles held the Knicks to just 38% shooting, while shooting 56% themselves.

Friday night, the Knicks were blown out at home 88-116. This 28 point defeat was the worst of this season for New York, since a 27 point loss to the Chicago Bulls on January 1st. Chris Paul led the way for the Clippers with a double-double. Paul tallied 16 points, 13 assists and six rebounds. His physical play led to an altercation resulting in Robin Lopez hitting him in the face. Lopez was ejected for the blows, and was the first Knick player to be ejected since Tyson Chandler back in 2014.

Anthony led Knick scorers with 16 points, and also had six assists. Porzingis was the next best scorer, tallying 13 points and eight rebounds. Both Anthony (4 for 12) and Porzingis (4 for 17) had rough nights shooting the basketball. Both were due to a combination of good Clipper defense and poor shot selection from Anthony and Porzingis.

When the Knicks stray from the triangle offense, the results are not good. New York posts a 1-11 record when shooting under 40% from the field. The triangle creates high percentage shots, and the Knicks need to consistently trust it.

Stats Of The Game: