Bronx, NY – June 24th – In Domenec Torrent’s first game as NYCFC manager, he helped inspire his team to a 2-1 comeback victory over defending MLS Cup Champ and Supporter’s Shield winners Toronto FC. Domenec took over last week for Patrick Vieira who took the head coaching job at OGC Nice in France after the prior Nice Coach Lucien Favre left for the Borussia Dortmund job in Germany. Torrent was an assistant under Pep Guardiola at Barcelona, Bayern Munich, and Manchester City, as well as being a former manager at Girona FC in Spain, so many are seeing this appointment as a step ahead as opposed to a step back. He speaks great English, and he knows the type of attacking, possession based football that the City Football Group wants to play.

The match looked very much even over the first half hour, but NYCFC captain David Villa was forced off with a knee injury in the 28th minute and with that NYCFC lost their main goalscoring threat. Villa was replaced by the young winger Jesus Medina. Things got even worse for City in the 37th minute as Victor Vasquez chipped a charging Sean Johnson from outside the box to give Toronto a 1-0 lead. That was Vasquez’s 3rd goal in 4 matches as he continued his great form for the visitors. The brand new manager Torrent went into the break and had to inspire the home team to come out running and gunning in the second half. Someone needed to pick up the slack for the injured Villa and lead this team if they wanted a chance to win the match.

Just 6 minutes into the second half, NYCFC’s renewed focus and tactics helped them tie the game at 1-1. After a chaotic sequence in the box, Jo Inge Berget back-heeled the ball and snuck it on the ground past keeper Alex Bono to score for City and change the atmosphere at Yankee Stadium in their favor. The stadium was oohing and ahhing at the replays of the goal on the jumbotron and the fans gave Berget a standing ovation for his golazo.

In the 68th minute, #10 Maxi Moralez played a through ball on the right wing to Berget who jolted past the last defender at full speed and slotted the ball past the keeper and into the bottom right corner. Berget seemed to kick into another gear once Moralez got the ball and Toronto had no chance at stopping him from putting the Blues in the lead. After they took the lead, City seemed to have a swagger about their play and an extra pep in their step that led them to dominate the remaining 20+ minutes.

Late in stoppage time, Sean Johnson made a stellar save to keep City in the lead, and after a Michael Bradley long ball crossed over the end line in the 94th minute, the referee blew the final whistle to crown NYCFC winners after a hard fought battle. The man of the match had to be Jo-Inge Berget after he dragged the home team out of a losing situation and helped win them all 3 points. It was good to see Berget active in the scoring since he only had one goal coming into this match. Perhaps this will be the kickstart he needs to settle in and start scoring more frequently.

NYCFC continued their long unbeaten streak at home with the victory, and in this season they are 7-1-0 at home, tops in the MLS. Now the focus shifts to David Villa’s injury as the team awaits the results of his knee scans. Coach Torrent said that it didn’t seem to be too bad and he expects Villa to only miss one or two matches. If he misses two, he will be absent for the matches away vs Chicago Fire and then home in the derby vs the Red Bulls. The City faithful are begging to the soccer gods to have their talisman and captain back for the derby as NYCFC will be looking for revenge after their two blowout defeats to Red Bull already this season. 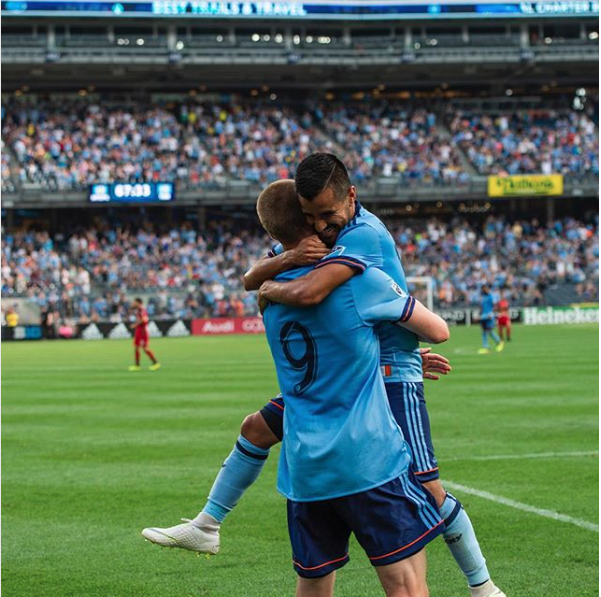