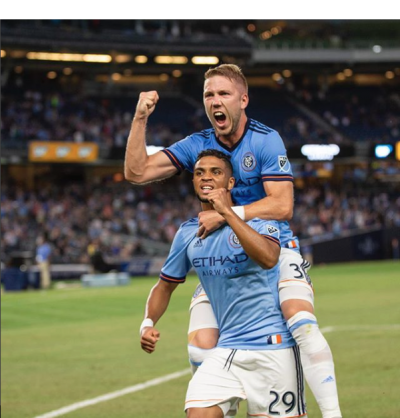 Bronx, NY – June 2nd, 2018 – On a warm humid night in the Bronx, NYCFC and Orlando City played a high tempo back-and-forth match that left the crowd of 22,000 at Yankee Stadium delighted in the end.  These two clubs are “expansion buddies” as they each joined the league prior to the 2014 Season.  Since then, NYCFC has been the better of the squads by far as they have turned into a legitimate title contender, while Orlando has struggled to find their footing in the MLS and have yet to reach the playoffs.  Orlando City’s manager Jason Kreis was NYCFC’s first ever manager, but he was unable to live up to the high standards set by NYCFC and was fired after just one season.  Kreis was definitely looking to stick it to his old club and leave Yankee Stadium with all 3 points.

After the opening whistle, Orlando was controlling the game but were unable get a goal. NYCFC was trying out a 3-4-3 formation in the first half and it wasn’t getting the job done.  Orlando was cutting through the NYCFC midfield and defense with ease to start, but NYCFC seemed to wake up after the Orlando City #10 Colman hit the post from outside the box in the 30th minute.  After a quick interception in the midfield, Ismael Tajouri-Shradi completely changed the match in the 35th minute.  Maxi Moralez swung a long ball to Anton Tinnerholm who waited patiently for Ismael to overlap him on the right hand side.  Tinnerholm then played the ball into Tajouri-Shradi on the right wing who cut back to the inside and curled the ball powerfully past the keeper and into the top left corner!  The rest of the first half was more tame as the teams settled in, but the Blues headed into the locker room full of confidence though they weren’t playing their best soccer.

The second half got off to a rough start for the Boys in Blue as they fouled Mueller in the box to give Orlando City a penalty shot.  Ex-New York Red Bull’s captain Sasha Kljestan stepped up to take the kick but he hit the outside of the right post and the momentum swung in NYCFC’s favor.  NYCFC fans were concerned about the status of David Villa since he didn’t start the match, but Patrick Vieira sent Yankee Stadium into a frenzy when he brought Villa on as a sub in the 65th minute for Jo Inge Berget.  Orlando hit the post a third time in the 74th minute further demonstrating that the ball wasn’t bouncing their way in this match.  Their efforts wouldn’t be enough in this match as NYCFC was about extend their lead yet again.  Tajouri-Shradi secured a brace for the second time this season, as he swung in a free kick in the 79th minute from the right wing that squeaked past everyone and into the back of the net.  The moment of the match came in the 87th minute with an exhilarating sequence that left the supporters going crazy until the final whistle.  Jesus Medina hit the crossbar which led to David Villa trying a volleyed mini bicycle kick and hitting it off the crossbar again before Maxi Moralez volleyed the 2nd rebound into the back of the net.  Although it was a close match throughout the first 80 minutes, NYCFC left feeling satisfied with a big 3-0 victory to get back on track.

When Jack Harrison left for England to join Manchester City, supporters were worried about who was going to score goals when David Villa was on the bench; however, Tajouri-Shradi is on pace to surpass Jack Harrison’s goal contributions by a long shot.  The winger has 7 goals already and is one of the better attackers in all of MLS.  This NYCFC team seems to score at will at Yankee Stadium where they have 15 goals scored and 2 conceded en route to a 6-0-0 record.  City also extended their franchise-record home winning streak to 7 games.  If they can recreate this form on the road, this team will be in a league of their own for the rest of the season. 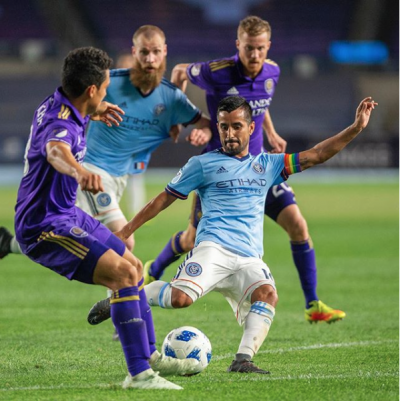