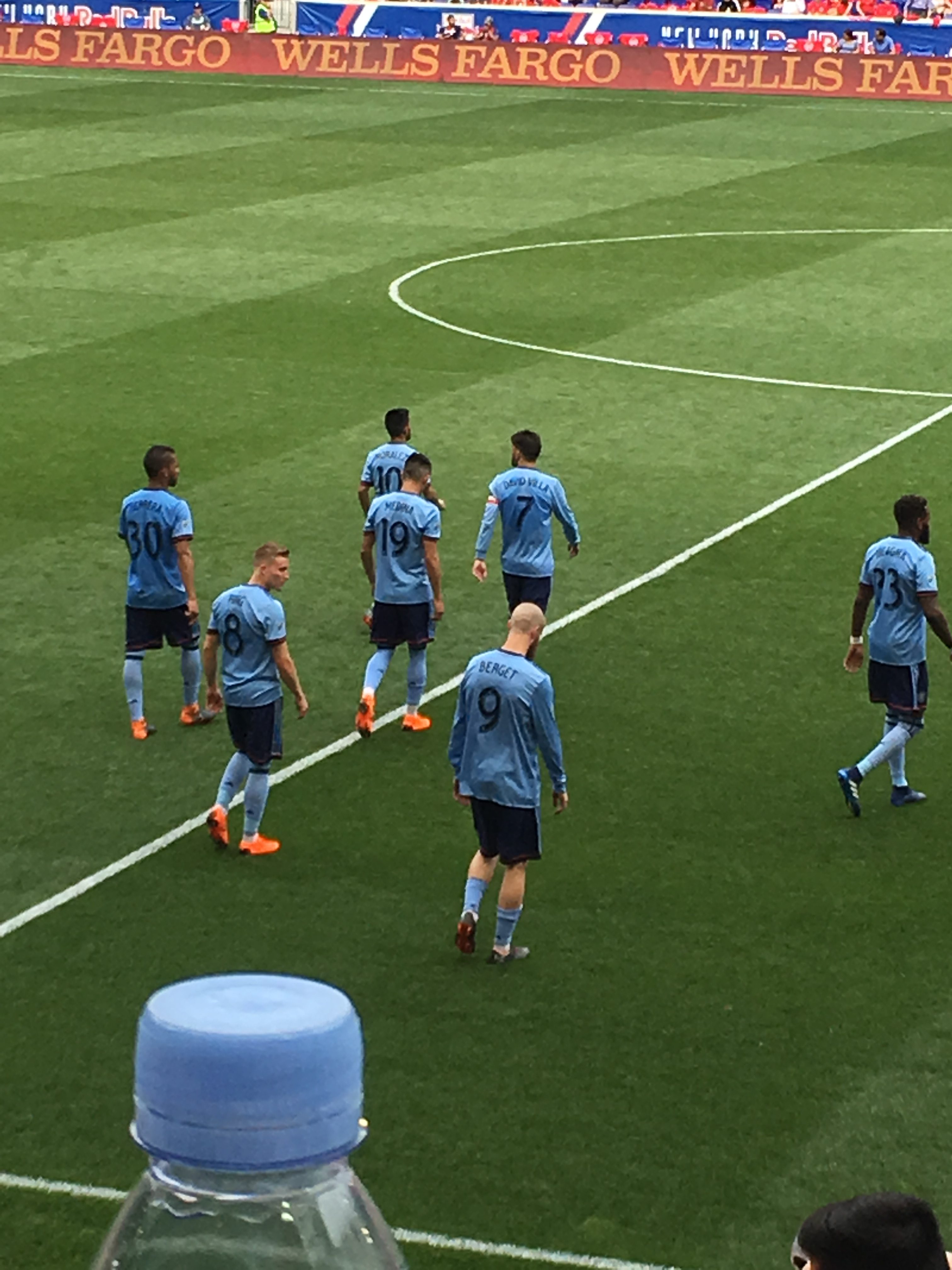 Harrison, NJ – May 5th – The atmosphere at Red Bull Arena was electric from the first moment you entered the parking lot for this heated matchup. Although this rivalry only started a few years ago, the tension between these teams is so thick, you could cut it with a knife! Both New York squads are considered two of the “Best of the East” so this battle promised to be a fight from the opening whistle to the final whistle. The rivalry didn’t get off to the most even start as Red Bulls jumped out to a record of 4W-0D-0L against their New York City counterparts. With NYCFC winning 3 and drawing 1 in the last 4, they hoped to even up the series at 4W-1T-4L; however, it wasn’t meant to be.

Before everyone was comfortably at their seats, Red Bulls got off to about as hot a start as is possible in soccer. NYCFC star man David Villa flicked a back heel pass in the first minute and it was quickly intercepted. The Red Bulls raced right down the field and their star English striker Bradley Wright-Phillips curled an effort from outside the box that forced a spectacular save from City’s Keeper Sean Johnson. Johnson, however, could only parry the ball off to the side and Alejandro Romero-Gamarra (known as “Kaku”) raced onto the rebound and sent Red Bull Arena into a frenzy after just 66 seconds! Before the fans were done cheering the fastest start to a derby, they doubled the lead with a strike by Florian Valot that took a strong deflection over Johnson. The Arena was shaking after just 3 minutes and 45 seconds, and the Red Bulls had seized full control over this match before NYCFC had a chance. Before the match, the traveling NYCFC fans were very loud and enthusiastic, but the upper section of blue jerseys got so quiet you could hear a pin drop after Valot’s goal.

Although the scoreline remained 2-0 for over 30 minutes, it was clear to anyone who watches soccer that Red Bulls were in total control. Their high press was crippling NYCFC who didn’t have any time to build the ball up out of the back. Portland had soundly beaten City on April 22nd, and Red Bulls clearly took the blueprint and made some tweaks to suit their style. NYCFC was slinging long balls down both wings because they couldn’t get past midfield playing through the middle of the park. Jesus Medina, the MLS leader in assists, and NYCFC’s new Designated Player, couldn’t use his creativity and quickness to create any chances because he didn’t have enough time on the ball to break the defense down. Then in the 35th minute, things got even worse for the visitors when Bradley Wright-Phillips continued his stunning record by scoring for the 11th time in 10 meetings vs NYCFC all-time, and stretched the lead to 3-0 with a header assisted by playmaker Kaku. Going into the half, the stadium was in a hysteria, and Patrick Vieira kept CM Ebenezer Ofori and CB Sebastien Ibeagha on the field to quickly warm up and get ready to sub on at half time for LB Anton Tinnerholm and CB Maxime Chanot. This change meant NYCFC were switching to 3 at the back for the second half.

When David Villa was pulled off for Substitute Rodney Wallace in the 66th minute after getting no shots on goal, it put the nail in the coffin on NYCFC’s comeback attempt. The game was much of the same in the second half, but when Derrick Etienne Jr came on as a sub, he wanted to make his mark. In the 79th minute, Etienne got on the end of a deflected ball and rounded the keeper before putting a smooth finish into the back of the net and running towards the Supporter’s Section behind the goal that was a screaming sea of Red all night long.

After the match, the moods of the two managers could not have been more different. Jesse Marsch came into the interview room with a smile and a pep in his step after the big victory and after finding out that Connor Lade was having a baby. On the other hand, Patrick Vieira was understandably upset with his team’s performance in such a big match. In the interview, when asked what he was trying to change at halftime, Patrick responded, “If I could have taken 10 players off at halftime, I would have.” Jesse was on the other end of the spectrum and he had high praise for his entire squad. He was especially appreciative of the pressure the midfielders and defenders put on NYCFC’s big guns Maxi Moralez and Captain David Villa. He also said, “We have to come up with a specific gameplan every time we play these guys.” In this match, Marsch’s plan certainly worked to perfection, and it will certainly boost the confidence of the entire team as they head into the meat of their schedule in the summer months.

While City are still ahead in the Eastern Conference and have a bright future, the Red Bulls clearly grabbed the Tri-State area bragging rights for at least the next 2 months. 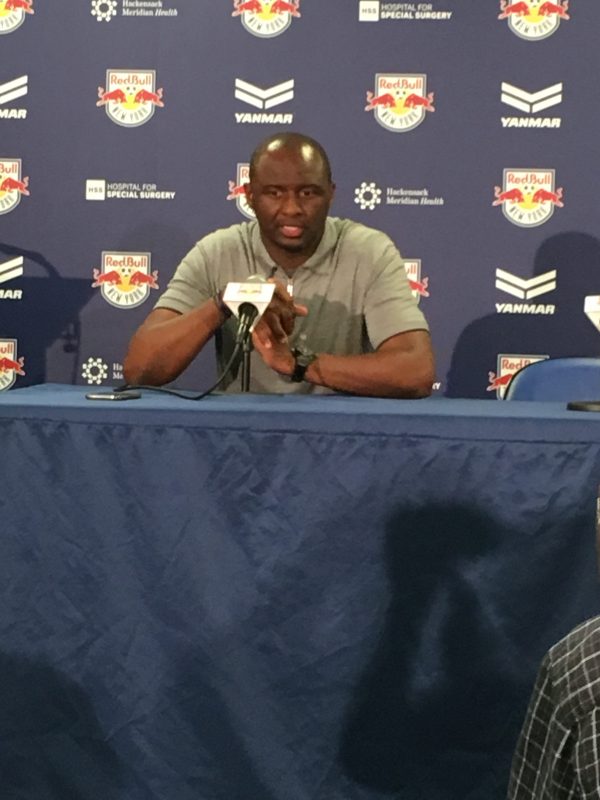 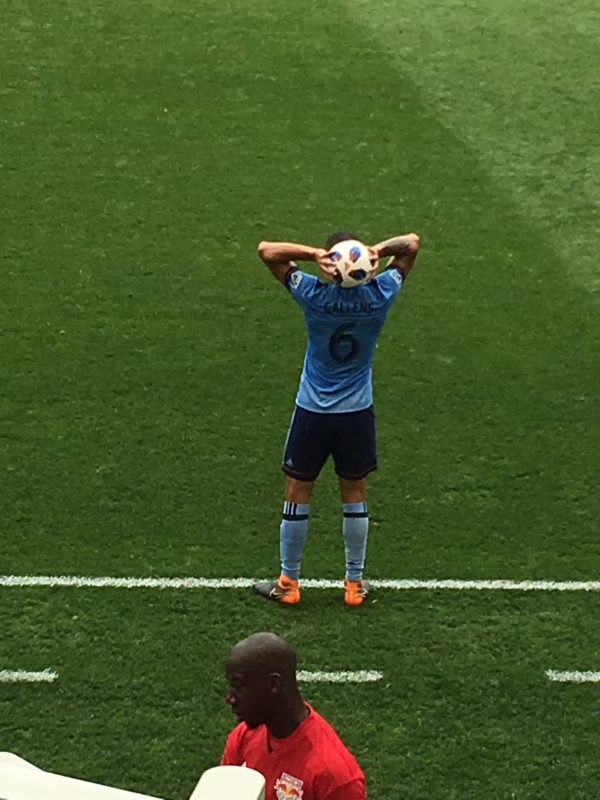 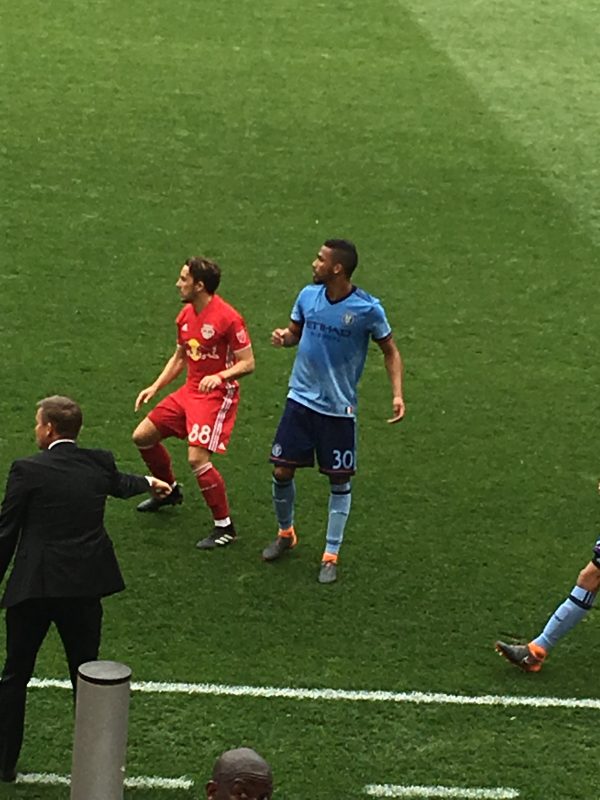 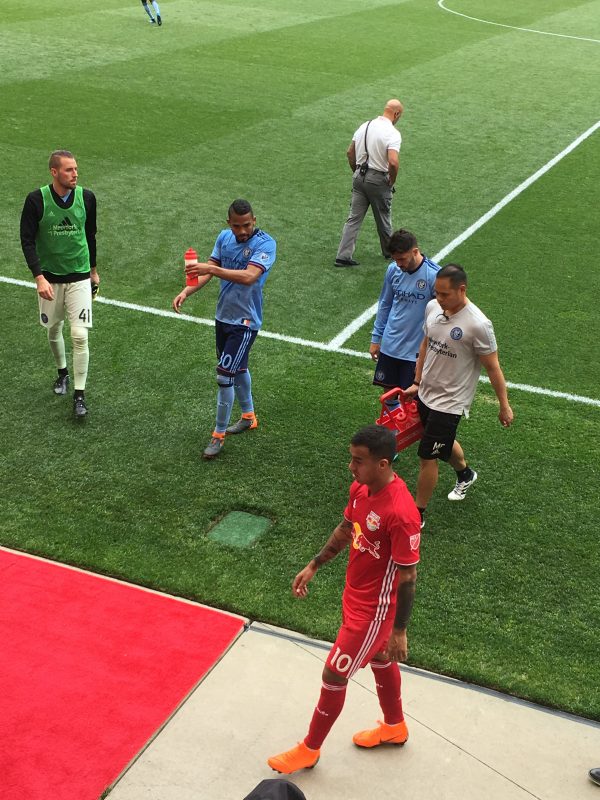 Thirty one years ago today I was fortunate enough to share this special day with my teammates, my family and our incredible Fans. #HTTR @Commanders

TMKS Hour 1: The guys reveal their Super Bowl predictions, and there could be a drastic shift in the Pro Picks standings after this weekend

Mets, Jeff McNeil reportedly agree to a 4-year extension with a club option for 2027, per http://MLB.com's @AnthonyDiComo.

Breaking news: The Mets are in agreement on a four-year, $50 million contract extension with Jeff McNeil that will keep the National League batting champion in Queens through at least 2026, a source confirms.

In 2022, the Bucs blocked QB coach Clyde Christensen from becoming Miami's offensive coordinator, which would have included a big raise. In 2023, the Bucs essentially forced Christensen out. https://wp.me/pbBqYq-cwq9

Literally all the adults involved in the Berhalter-Reyna drama have now lost their jobs.