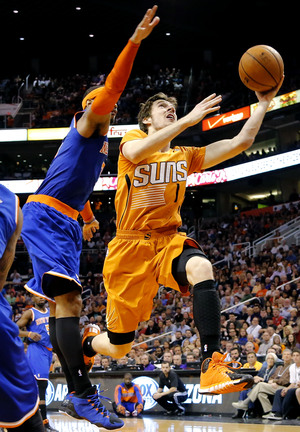 The Knicks entered Friday just a game and a half back of the eighth seed in the playoffs. It wasn’t long after the game started that the Knicks knew they would soon be two games behind Atlanta. After winning eight games in a row the Knicks have now dropped three of their last four and yet still sit just two games back of eighth place Atlanta as the two struggling teams seem to be fighting to get out of the playoffs. Losing these past three of four could have easily been four straight losses as the Knicks were very close to blowing a huge lead against Sacramento Wednesday night.

Goran Dragic tore the Knicks up with 32 points in just as many minutes as he led the Suns to a blowout 112-88 victory over the struggling Knicks. The Suns lead by 22 at the half and really didn’t look back from there. Miles Plumlee totaled a double double on the night as the Suns rolled. Eric Bledsoe and Markief Morris had 16 points while Bledsoe would also have seven rebounds and six assists.

Carmelo Anthony would have 21 points and Amare’ Stoudemire would add 19 as the Knicks got blowout again on their west coast. Friday night was the Suns sixth straight win as they sit in seventh place in the Western conference. The Knicks now sit two games back of the eighth place Atlanta Hawks who have lost their last six straight games leaving a window of opportunity open for the Knicks to make the playoffs.