The Glaring Hole on The Mets Roster 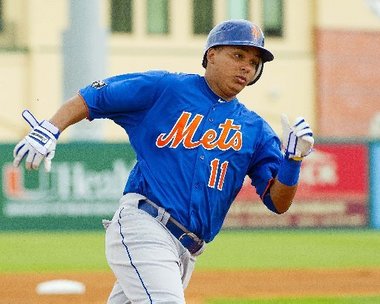 Make no mistake about it, I am a Sandy Alderson supporter. In no way do I endorse Fred and Jeff Wilpon’s parsimonious spending, but I am a big fan of what Alderson has been able to do despite being handcuffed financially. He established a blueprint for future success centered around pitching and defense and has really racked up quite a collection of young power arms with scary potential.

Despite the impressive farm system Alderson has built, the big league Mets entered this offseason with some considerable holes both offensively and defensively. The Outfield was anemic, the Bullpen was erratic, and Shortstop and First Base were glaring weaknesses.

Alderson did his best to try to fill some of the holes given the restricted budget imposed upon him by Mets Ownership.

He began the offseason by signing OF Chris Young to a 1 year deal worth $7 million, a solid two-way player assuming he’s healthy. Then Sandy made a much more significant signing by inking OF Curtis Granderson to a 4 year deal worth $60 million. Those two acquisitions notably improved the Mets Outfield situation.

Next Alderson signed SP Bartolo Colon to a 2 year deal worth $20 million. The Mets needed a top of the rotation workhorse to replace Matt Harvey, who is out for the year after Tommy John surgery, so this was also a crucial signing.

Alderson went on to invite veteran Pitchers like Jose Valverde, Kyle Farnsworth, and John Lannan to spring training with the hope that they could catch on and strengthen the Bullpen while mentoring some of the Mets young Pitchers.

Then the Mets spending stopped even though there were still two huge holes to fill at First Base and Shortstop.

There may not have been many external options for First Base, but it is completely unacceptable to enter the season starting the out of shape, overrated, complacent Ruben Tejada at Shortstop.

However nice it is that the Mets finally spent a little bit of money signing Granderson and Colon, it is simply not good enough if they are going to leave this glaring hole in the middle of their infield.

Especially when they could easily just sign Stephen Drew, a defensive anchor and a dependable veteran leader. He’s also a reigning World Series Champion and most importantly the Mets would be able to attain him without losing any valuable prospects.

However if they are willing to part with a young arm from their farm system (obviously not named Syndergaard or Montero) they could easily make a trade for a young up and coming SS such as Arizona’s Didi Gregorious or Seattle’s Nick Franklin.

It would even seem many Mets fans see Utility Infielder Wilmer Flores as a better option than Tejada and he’s not even really a Shortstop, more of a Second Baseman.

There are a variety of things the Mets can do to fill this void but to go into the season with Ruben Tejada as the SS is a smack in the face to long suffering, die hard Mets fans. It also serves as a reminder that the Mets as a franchise are not really quite out of their financial problems just yet.

Is it possible that Matt Harvey’s elbow injury convinced Mets Upper Management to put off spending major money in free agency for yet another year? Or are The Wilpon’s just continuing their penny-pinching ways?

According to the New York Daily News, Sandy Alderson told Mets executives and personnel that he expects a 90 win season this year. Fred Wilpon even went as far as to say “We better win 90” during the same meeting.