9 Man NYCFC Holds On For Draw vs Red Bulls 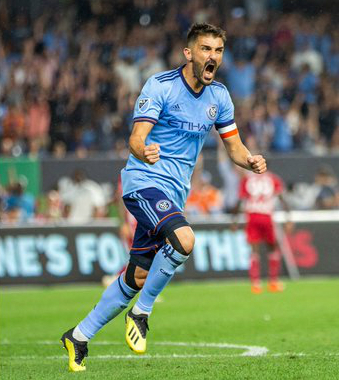 Bronx, NY – August 22nd – Normally the Hudson River Derby has enough hype on its own, but this matchup was crucial to both teams chances of earning a first round bye in the Eastern Conference, so there was some added buzz around Yankee Stadium.  From the very first moment, it was clear the match would not end 11 vs 11.  There was added aggression on both sides, which made for a spectacle that the fans in attendance won’t soon forget.

In the 19th minute, the Red Bulls almost took the lead as Bradley Wright-Phillips spun and fired a powerful shot, but Sean Johnson got his fingers to the ball and pushed it aside.  Soon after, Villa found himself in the box with space to shoot, but he was unable to find the goal and fired into the side netting.

A few minutes before halftime, the Red Bulls got the road goal they were looking for as Wright-Phillips headed home at the back post.  It seemed like the game was about to become even more one sided after NYCFC’s debutante Eloi Amagat was sent off with a straight red for a harsh tackle near midfield.  This set the Red Bulls up with a man advantage for the rest of the match, and NYCFC would need to fight to have a chance for a draw.

After the half, strangely enough, it was NYCFC who were the stronger team.  They came out flying after the restart, and they were rewarded with a well deserved goal in the 52nd minute from their captain and savior, David Villa.  The ball was cleared long and into the path of Jo-Inge Berget.  Berget got his head cleanly on the ball, and passed it backwards to David Villa who struck the ball with power underneath Robles and into the back of the net for the equalizer.  The Red Bulls were stunned as just a few minutes ago it seemed they were in total control of the match.

Although down a man, City seemed the stronger side, and they continued to push forward looking for the winner.  That came to a screeching halt as Ebenezer Ofori became the 2nd NYCFC midfielder shown a straight red card after a challenge on Wright-Phillips was was deemed illegal by the VAR.  The first red card was fairly obvious, but the second red filled the match with controversy.  Ofori was ruled to have stomped on Wright-Phillips’s leg, but he was looking in the opposite direction and it seemed more of a coming together of legs.

With the 2nd man sent off, it now left the game at 11 vs 9 which should have been an unbelievable Red Bulls advantage.  However NYCFC continued to push forward.  NYCFC coach Domenec Torrent made 3 offensive substitutions and he refused to back down even with the disadvantage.  A few minutes later, Red Bulls full back Kemar Lawrence made a questionable foul with a swinging arm at Anton Tinnerholm’s neck, but the referee ruled it as only a yellow card which sent the stadium into a frenzy.  The referee was inconsistent all night, and both teams seemed to be upset with the way the match was run.

When the 4th official showed 8 minutes of extra time on the board, everyone in Yankee Stadium got on their feet.  Both teams had good late chances including one for Rodney Wallace that nearly brought the house down, but this match ended in the most eventful 1-1 draw of the season.

The man of the match has to go to the captain David Villa who showed that he still has what it takes to be the leader of the team.  Although down 2 men, Villa and the boys never gave up, and showed a tenacity and grit that City will need if they want to advance in the playoffs.  Villa scored his 10th goal of the season which tied him for the team lead with newcomer Ismael Tajouri-Shradi.  Many players come to the MLS for one last paycheck, but it is clear David still plays every game with 100% intensity for his club. 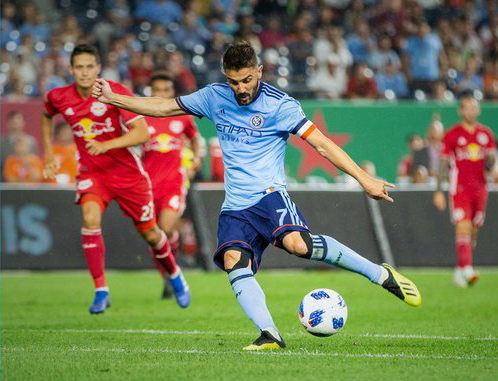