Bronx, NY – July 8th – Coming into this Derby, NYCFC were weakened with Captain David Villa and Jo-Inge Berget both missing due to injury, but they were determined to get a result against their bitter rivals. The last time these two faced each other at Yankee Stadium was August 6th, 2017, and it might have been the best soccer match in the history of the rivalry. The best players came to play in that matchup as Bradley Wright-Phillips scored 2 goals but NYCFC Captain David Villa scored a hat trick including a late game penalty to win the match for the Citizens! This match would have plenty of drama as well, but not nearly as many goals.

The first half saw a lot of good play from both sides but neither could break down the defense. Jesus Medina had the best chance of the first 45 with a deflected strike that scared Luis Robles but he watched in go past the post and wide. In the final two minutes, both teams had minor chances, but they went into the locker room in a stalemate hoping to set up a gameplan to get the ball in the back of the net.

The game seemed to switch in NYCFC’s favor in the 57th minute when Ronald Matarrita came on for Tajouri-Shradi. Mata came in with some much needed energy and immediately forced a save out of Robles. Soon after, Wright Phillips almost snuck one in at the near post but Sean Johnson stopped the shot with a strong hand. NYCFC never park the bus at home even against good opponents, and so they continued to push forward looking for that one special play to win the match.

The game finally got it’s major moment after much anticipation in the 85th minute. Jonathan Lewis comes on at the end of almost every single match as a quick impact super sub, and today he really earned the “super” in his nickname. Lewis forced a mistake by taking the ball from Aaron Long in the midfield to start the counter attack. Then he found Maxi Moralez with a through ball and the heart and soul of the team put the ball into the back of the net to give the fans what they were looking for all night. The Red Bulls almost stole a point late though, as Alex Muyl struck a ball at the near post with pace but Sean Johnson was able to keep it out to preserve his 6th shutout of the season. With the victory, NYCFC has now won 3 consecutive home Derby matches vs Red Bulls.

Johnson was integral to the team’s success in this battle with his 4 crucial saves. Without a doubt he was the man of the match with his clutch stops and vocal on-field leadership. If Villa wasn’t on the team, I think the goalkeeper would have the strongest case to be named the captain of NYCFC. Very few players are as much of a sure thing as Sean Johnson. When he is in the starting 11, he always brings his A game.

This Hudson River Derby had a very different feel than the ones in the past. On Friday, Jesse Marsch resigned as head coach of the Red Bulls to pursue his dream of coaching soccer in Europe. He will take over as assistant coach at RB Leipzig who plays in the Bundesliga in the top tier of Germany. This being grouped with Patrick Vieira’s resignation a few weeks ago means that both managers coached in their first ever Hudson River Derby. Taking over for Marsch is ex MLS all-star midfielder Chris Armas who also made 66 appearances for the US Men’s National Team from 1998-2005. Since Armas was already Jesse’s assistant, the transition between coaches should be relatively smooth, but his team couldn’t get him a result in his first match in charge. 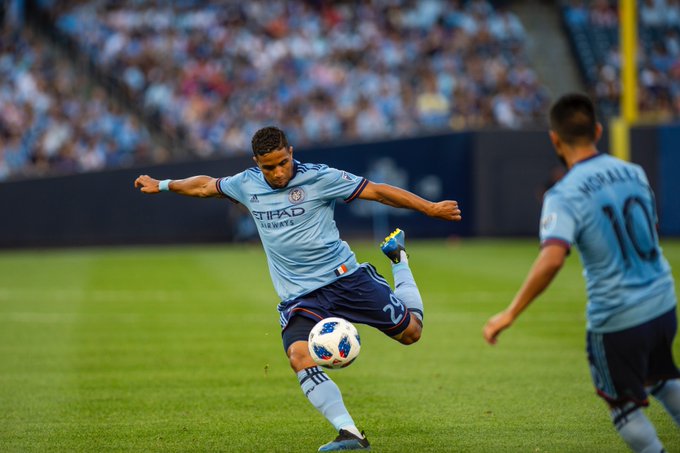