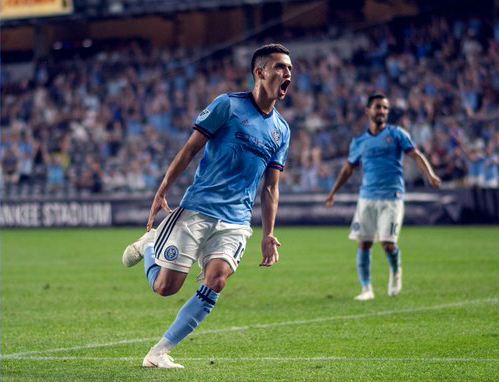 Bronx, NY – July 14th – New York City Football Club’s 2017 Season ended tragically at home after a 4-3 aggregate loss in the playoffs to the Columbus Crew, and they wanted to get some serious revenge in this Eastern Conference rivalry.  The Crew have been fighting a struggle with their owner who wants to move the MLS’s first ever franchise out of their home and off to Austin, Texas.  “Save The Crew” banners have become as popular as “Wenger Out” banners were last season, and many could be seen in the stands of Yankee Stadium by both sets of fans.

This match started off strongly in the favor of the Crew who could have scored 3 goals in the first 10 minutes.  Sean Johnson was forced to make a double save that bailed out his defenders and teammates from a defensive breakdown.  Soon after, defenders Chanot and Callens both had to make goal saving stops to keep the match scoreless.

NYCFC didn’t create many chances at all in the first half, but they almost scored in the 20th minute.  Callens headed strongly from a Maxi Moralez corner, but US Men’s National Team GK Zach Steffen kept the ball out of the net with a big save.

After 45 minutes, the Crew were the better team by far, but they had nothing to show for it.  Often when one team dominates the first half but doesn’t score, the other team will come back and take control of the second half, which is exactly what we saw in this instance.  The performance looked a lot like their lackluster first half performance vs Montreal on Wednesday, and we all saw how that turned out in the 2nd half.

In the 52nd minute Maxi Moralez truly should have opened the scoring.  He stole the ball away from the final defender and broke away on goal, but he was indecisive and Steffen made a big save.  Jesus Medina got to the rebound but narrowly missed with the follow-up.

Within a minute of that chance, Jonathan Lewis came off the bench for his usual 2nd half cameo appearance.  His trademark energy and speed came to use in the 71st minute as he flew down the left wing and played a cross to Medina who set up Maxi but the Columbus defense made a fantastic stop.

At this point, it seemed to everyone in the stadium that this match was destined to end 0-0, but NYCFC had other ideas.  The Citizens continued to press and attack which caused Columbus to make the mistake of the match.  The left back passed back casually to Steffen who made a poor pass right to Jonathan Lewis inside of the box.  Lewis shot and struck the left post but got his own rebound.  He paced down the left and crossed into the smaller 6 yard box.  Medina was waiting wide open at the back post.  He took his time and controlled it cleanly before smashing it into the back of the net for the opener in the 79th minute.

Late in the 90th minute with the score still 1-0 NYCFC, Anton Tinnerholm got the ball and set out down the right flank on the counter attack.  On a 3-on-2 breakaway, Tinnerholm decided to keep it the entire way and head into the box.  Once he got there, he cut back in onto his left foot and squeaked one into the bottom right corner of the net to clinch the victory in the final match of a long week.

NYCFC went 3-0-0 in a 7 day span with 7 goals scored and 0 conceded.  This has been the best defensive stretch for the franchise since they came into the MLS as an expansion team.  If NYCFC was in the Western Conference, they’d be well in first place, but with Atlanta United setting the pace in the East, NYCFC will have to continue to keep up the good work to earn their playoff BYE. 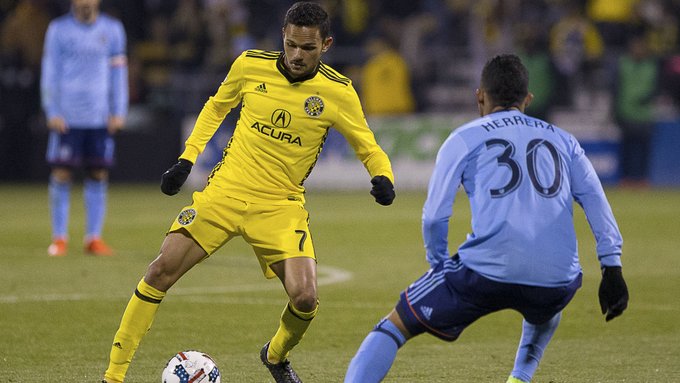